Apple's Thunderbolt to FireWire adapter is finally on sale in the Apple Store.

Apple's relentless drive to shave millimeters off its laptops has come at a cost — your new MacBook Air or MacBook Pro with Retina display might not have quite as many ports as you're used to. The company's own FireWire 800 port has fallen out of favor in recent years, for example, with Apple electing to push Intel's newer Thunderbolt standard in its place, but now there's a solution for those still relying on the older connector for audio devices and similar applications. Announced along with the new laptop lineup at WWDC in June, the Thunderbolt to FireWire adapter is capable of providing up to 7W of power and is finally on sale now at the Apple Store for $29. It's not the most elegant solution, no, but it just might be the final excuse you need to pick up that Retina MacBook Pro.

Update: Oddly enough, Apple has pulled the Thunderbolt to FireWire adapter from the online store. It's not clear why this is the case, but we expect this niche (but still useful) accessory will be back in the store sooner or later.

Update 2 (8/4/2012): After disappearing for a short time, the Thunderbolt to FireWire adapter is once again available from the Apple Store. Unfortunately it's not eligible for in-store pickup, so you'll need to place an online order to get those FireWire 800 peripherals playing nicely with your Thunderbolt-enabled Mac. 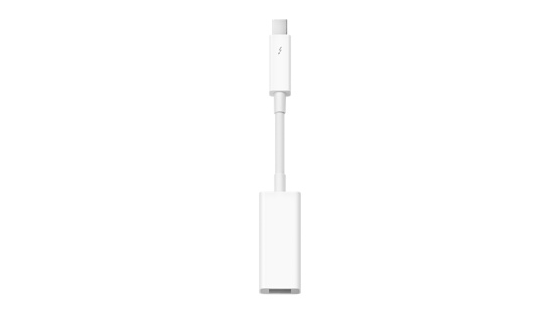