Lenovo is planning to introduce a business-focused Windows 8-based ThinkPad Tablet 2.

Lenovo has previously shown off a prototype Windows 8 tablet back at Computex Taipei in June, which recently passed through the FCC. A leaked Lenovo document on the tablet, sent to us by a tipster, suggests it will be focused at business users and named the ThinkPad Tablet 2. Powered by a dual-core Intel Clover Trail processor, the Tablet 2 will include 2GB of RAM, 64GB of storage, and a 10.1-inch WXGA display. Lenovo admits it's "hard to compete" with Apple's App Store as "that is considered 'The Standard,'" but the company is positioning its Tablet 2 as a competitor to Apple's iPad on the business side — offering up comparisons throughout a marketing document. 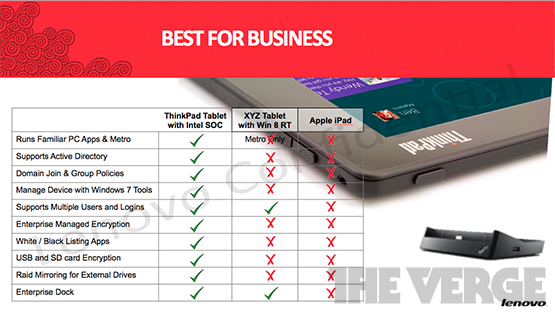 Other notable features include optional support for pen input, NFC, a fingerprint reader, a dock that includes a keyboard, and LTE / HSPA+ connectivity. Lenovo doesn't say when the Tablet 2 will go on sale, but with a debut at the FCC earlier this week it's reasonable to expect that this business tablet will be ready for the Windows 8 launch on October 26th.