Google+ partners with the NFL for fantasy football Hangouts

Google+ partners with the NFL for fantasy football Hangouts

Just in time for the upcoming fantasy football season, Google+ has partnered with the NFL so you can Hangout while you draft players and make trades.

For those planning to join a fantasy football league this season, Google has partnered with the NFL so that you can keep in touch with your opponents in a Google+ Hangout. Once you join a league at NFL.com/fantasy, you can create a Hangout with a single click, and soon you'll be able to check if anyone else in your league is already in the Hangout from the NFL's site as well. And since most fantasy leagues consist of 12 people, Google has also upped to room limit from the standard ten.

In addition to letting you easily connect with fellow players in real-time, you can also expect to see "top NFL Fantasy commentators" hanging out and giving advice, while Google will also be broadcasting Hangout highlights at the NFL Network's Google+ page. With the NFL season due to kick off next month, you have plenty of time to prepare — just be sure to put on your game face. 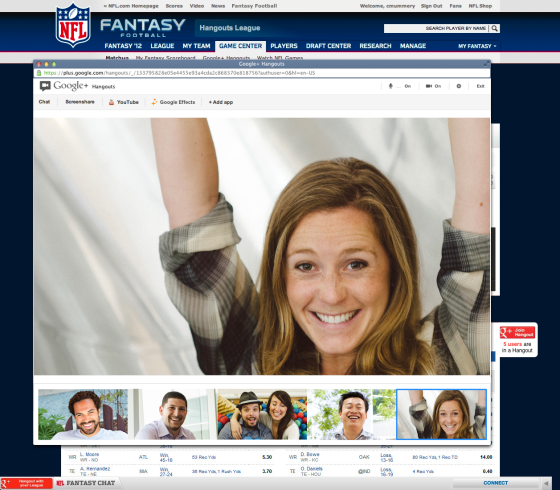