The Twitter Political Index aggregates tweets about the two major US presidential candidates and checks how positive (on average) they are compared to the rest of the content on Twitter.

As the US election season heats up, Twitter has unveiled its own analytical tool: the Twitter Political Index. The Index checks for tweets mentioning Romney or Obama every evening, then weighs how positive or negative they are in aggregate and compares that number to the average positivity of all tweets. The resulting number describes this comparison, so that 34 next to Obama's name means that tweets mentioning his name or Twitter handle were more positive on average than 34 percent of the sum of all tweets. That doesn't reflect particularly well on either candidate right now, but a Topsy Labs comparison of Obama's index numbers with Gallup polls shows a rough correlation between the two. The Index was built by Twitter in conjunction with Topsy's data management team and two major opinion polling firms; it's meant to supplement traditional polling by providing more nuanced data. 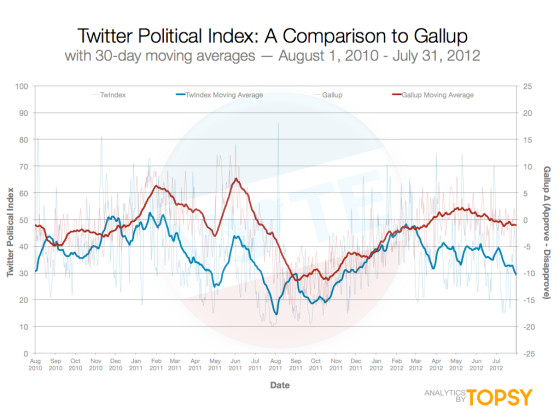 One thing that's not mentioned in Twitter's explanation is whether the Index takes into account the number of tweets per candidate, as did this French election tracker. While the page shows us how many followers Romney and Obama have, it's not clear whether a small number of positive tweets would produce a higher score than a much larger group of mixed ones, potentially giving a skewed view of one candidate's popularity. Topsy will be publishing analysis of the numbers, and USA Today will be featuring them on their election page, so we expect to see much more of the Twitter Political Index in the coming months.