An Apple expert witness said today that smartphone owners would be willing to pay a $100 premium for the features Apple is accusing Samsung of copying.

Apple's been showing the results from a number of surveys today, and one expert witness just made one of the more intriguing statements we've heard: smartphone users would be willing to pay a $100 premium for the features Samsung is accused of copying. Dr. John Hauser, a professor of marketing at MIT, came to his conclusions after conducting an online survey, and found that the iOS "bounce-back" feature was worth a $39 premium to smartphone owners on its own; coupling the feature with tap-to-zoom and two finger gestures, he said, would bring that total to $100. He produced similar results for tablets; according to his study, bounce-back was worth $45 on a tablet, while the total for all features came in at $90.

Apple attorney Michael Jacobs asked Hauser almost no background about the methodology of his test, putting the burden on Samsung — whose attorneys have been quite aware today of the dwindling time they have to mount their defense. When asked about the study by attorney Bill Price, Hauser was vague, no doubt to the delight of Apple's legal team. "It's a survey, there's some complicated analysis in there," he said. "We ask consumers some questions and their willingness to play... and this is a summary of their answers."

Price continued to probe for more detail, asking Hauser if he could address one answer in 15 seconds. Hauser said he would need more time, but that "I'm trying to help you out."

"Oh I don't know about that," Price said, before moving on to another question.

Known as a conjoint study, the analysis was based around a smartphone priced at $199 and a tablet priced at $499. Price continued to probe, pointing out that Hauser neglected to include the results for other features, such as camera or number of apps, that would have let the jury perform a "common-sense" evaluation of whether the results were reasonable. Hauser stood by the validity of his report. 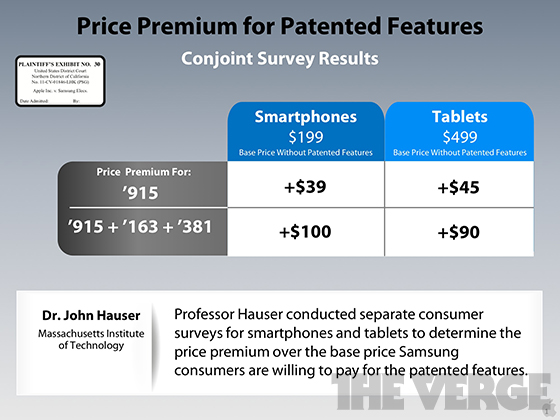