By Dieter Bohn@backlon Aug 10, 2012, 8:33pm EDT
Via The Next Web and Google Account choose help page

Google has quietly launched a new feature to help users who have multiple Google accounts called "Account chooser." First noticed by The Next Web on the Gmail login interface, the new feature displays a list of multiple accounts instead of just one — which significantly reduces the number of clicks required to switch accounts. To manage the new feature, you can go to https://accounts.google.com/AccountChooser to add new accounts to your list or remove them. Oddly, you must be signed out of at least one of your Google accounts to surface the "Edit" button that allows you to remove accounts from your list. Google has previously done some work this year to make managing multiple accounts easierand this solution makes it better still. However, even with the new Account chooser you'll still be presented with a password request on some pages but not on others — so there's still work to be done. 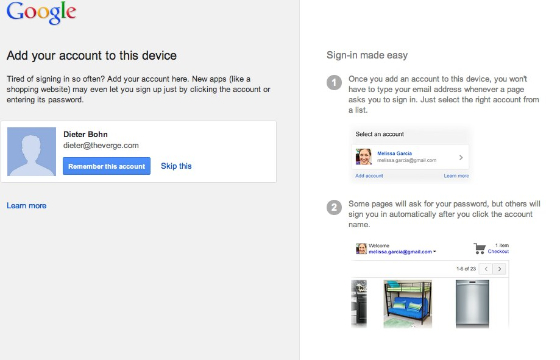