An internal Apple survey shown today in court revealed that 48 percent of consumers that chose Android over the iPhone did so because they wanted to stay with their current mobile carrier.

We're seeing some new internal documents during today's Apple v. Samsung testimony, and this time it's a survey Apple put together on why consumers considering an iPhone went with Android instead. According to Apple's results, the most predominant reason had nothing to do with Google's mobile OS at all: 48 percent stated "Wanted to stay with current provider" as a motivating factor. The survey itself was presented in January 2011, the month the IPhone came to Verizon.

Trusting the Google brand came in at 36 percent, with 27 percent stating that they preferred the Android Market. Certain elements that have become distinguishing characteristics for Android — like larger screens and turn-by-turn navigation — came in at just 30 percent and 25 percent, respectively.

With the survey indicating that 25 percent of overall Android buyers at the time had considered an iPhone, the numbers gives us a real look at just how much the iPhone's AT&T exclusivity may have hurt it while Android — and Verizon's Droid brand — surged in the US. 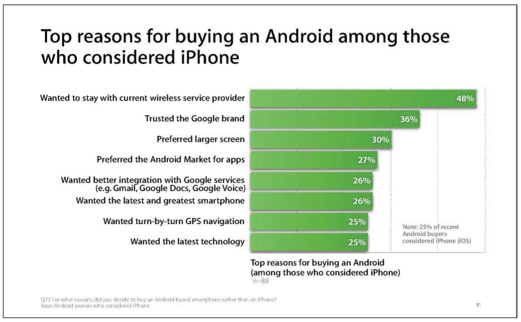 Update: An earlier version of this story reported that 43 percent of survey respondents stated staying with their carrier was an important factor rather than 48. We regret the error.