Last month's update for Parallels Desktop 7 for Mac didn't add support for the Retina display as it was reported.

Last month, Parallels announced that its popular virtualization software Parallels Desktop 7 for Mac was updated to support the Retina display on the new MacBook Pro, but all wasn't nearly as it seemed. Inadvertently or not, Parallels had incorrectly led its customers (and the media) to believing that Windows, Ubuntu, and any other OS you could throw at the program would be able to use the 2880 x 1880 display on Apple's latest machine.

Retina support? Not so much

What owners of the application soon realized, however, is that virtualized operating systems like Windows 7 are completely unable to handle the Retina display in the app. It's not Windows 7's fault — it can handle the screen just fine in when running natively in Boot Camp — the problem is that Parallels wasn't written to exempt itself from OS X's built-in display scaling. With Windows running in fullscreen at 2880 x 1880, OS X currently scales down the image to 1440 x 900 (if you keep the Mac's settings at defaults) and then scales it back up to full resolution, resulting in a horribly pixelated experience.

The only workable solution at the moment is to match your Mac's scaling mode (the default is 1440 x 900) with the resolution you set Windows to in Parallels. Even then it's not quite right, and if you want Windows to run properly at 2880 x 1800, you'll need an unofficial OS X utility, as the Mac doesn't have a one-to-one pixel mode. 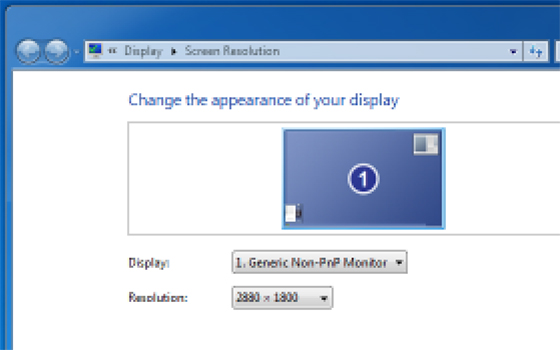 The real problem is that everyone was led to believe that Parallels Desktop 7 would work perfectly well with the laptop's high-resolution screen. In a promo video the company says that the app "runs just great and takes full advantage of the new Retina display in the MacBook Pro." That video itself is limited to 360p in YouTube, and, ultimately, it appears that only the app's icon and its user interface have been updated to support the Retina display.

We reached out to Parallels, and were told that "we do not have Retina display support inside of a guest operating system in Parallels Desktop today" — a far cry from its original announcement. The good news, however, is that the company says its engineers are working on the issue, though we couldn't get an estimate of when an update will be available. If Parallels hopes to keep its customers happy, though, it should be sure to make that update free for all users.

Update: Parallels has given us a bit more information on what other changes it implemented for the Retina display other than an updated UI and support for the new hardware.