A musical based on The Flaming Lips' album Yoshimi Battles the Pink Robots is coming to San Diego's La Jolla Playhouse from November 6 - December 16.

The Flaming Lips' classic 2002 record Yoshimi Battles the Pink Robots was a concept album of sorts, with the first few tracks dedicated to telling the tale of a Japanese girl's fight against an army of murderous machines. Now that story is going to be realized on the stage, with a Yoshimi musical coming to San Diego's La Jolla Playhouse from November 6 - December 16. The show will also feature music from Lips albums The Soft Bulletin and At War With the Mystics.

A Yoshimi musical has been on the cards for quite some time; singer Wayne Coyne told Entertainment Weekly in 2007 that The West Wing and The Social Network writer Aaron Sorkin was working on a script with director/producer Des McAnuff, who helmed Jersey Boys and The Who's Tommy. The La Jolla Playhouse's listing makes no mention of Sorkin, though, naming Coyne and McAnuff as the writers. If all this has you intrigued, here's the synopsis:

Yoshimi is a young Japanese artist facing the battle of her life: the battle for her life. Adrift from her family and lover, Yoshimi journeys alone into a fantastical robot-world where she wages a war with fate. Will her will to survive be powerful enough to master the evil forces that threaten to destroy her? Inspired by the whimsical and psychedelic music of Wayne Coyne and The Flaming Lips, this world premiere musical integrates music from several albums ("Yoshimi Battles the Pink Robots," "The Soft Bulletin," "At War with the Mystics") with Coyne and multiple Tony Award-winning director Des McAnuff's poignant, humanistic story about the triumph of love and optimism over the mystery of our own mortality. The result is a dazzling, multi-media experience that offers an allegory of our modern battle for progressive thought and individuality in the face of blind acceptance and conformity. 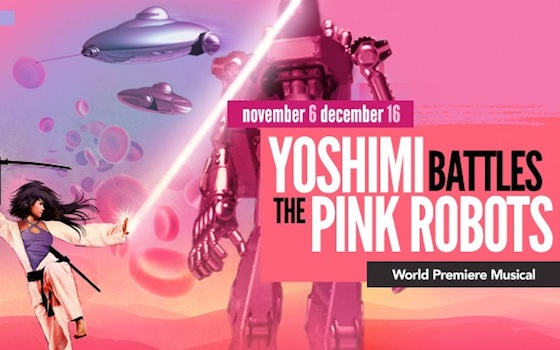