Caffeinated 1.3 for Mac offers a host of new features, including a customizable services toolbar, support for Delicious and Pinboard, improved subscription management tools, Notification Center integration, enhanced support for the MacBook Pro with Retina display, and a wide variety of bug fixes.

As more and more people get their news through social outlets, RSS feeds are starting to feel like a somewhat antiquated tool — constant sharing over Twitter and Facebook and visually appealing options like Flipboard means that the average person is rarely hurting for reading material to add to their Instapaper or Pocket queue. That said, there's still a market for high-quality, dedicated RSS apps. Silvio Rizzi's Reeder (first for iOS, then for Mac) has been a popular option for several years now — but Curtis Hard's Caffeinated for Mac launched with a bit of fanfare last February, getting featured as a notable new release in the Mac App Store.

Since launch, Hard's been working on plugging the app's bugs and adding new features, which culminated in the release of Caffeinated 1.3's release last weekend. The new update includes a customizable services toolbar, support for Delicious and Pinboard, improved subscription management tools, Notification Center integration, enhanced support for the MacBook Pro with Retina display, and a wide variety of bug fixes. We took it for a spin to see if the app's $8.99 price is justified — and whether it can unseat Reeder as our preferred method for digging through Google Reader. 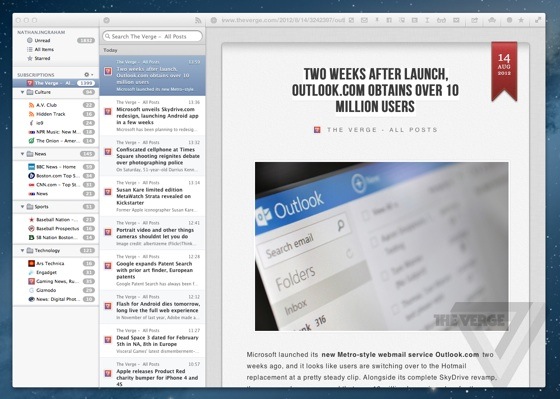 A bit more at home in Mountain Lion than the competition

Visually, Caffeinated uses the familiar three-pane interface that Apple uses in OS X Mail — and that Reeder has used since it launched in late 2010. Hard was quick to note that while Reeder beat his app to market, Caffeinated was actually in development before Rizzi's app was available — Hand isn't trying to copy his most obvious competitor. Regardless, it's a highly logical layout for the information being displayed. Stylistically, Caffeinated looks much more like a "native" OS X app than Reeder, which has a highly polished interface that nonetheless feels much more like an iOS app (unsurprising, given the app's background). Whichever one you prefer, it's worth nothing that Caffeinated is a bit more efficient with the leftmost "feeds" area — on a smaller screen, the app makes a good use of vertical space to show as many of your feeds as possible.

Caffeinated is seeking to further differentiate itself from the competition through a rather unique "theme" feature. Themes apply to the article preview pane and can be written in HTML and CSS — but for those who don't want to spend the time or effort in writing their own themes, the few existing default options can be modified. Fonts, sizing, and spacing can all be tweaked to a user's preference, unlike the rigid defaults found in Reeder. There are only three theme options when you first launch the app, but a quick Google search will find some themes posted across various blogs — Hard says there's no centralized theme location yet as he focuses more on the core of the app itself. 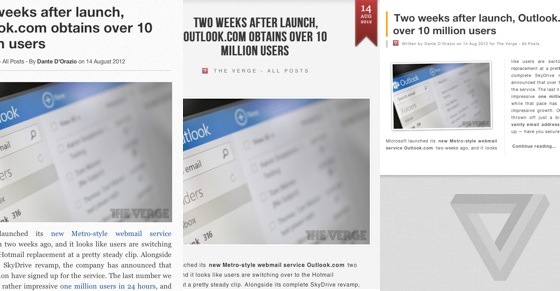 At the top of the app, you'll find icons for marking all as read, refreshing your feeds, marking an individual item as read or giving it a "star", going to full screen — and there's also a customizable bar for your preferred sharing services. Caffeinated supports the expected copy / email / view in browser services and also includes a wide variety of sharing options, perhaps the most notable of which is Google+ sharing (a service not found in Reeder). Safari users will also be happy about the inclusion of the Safari Reading List, as well. It's a comprehensive list that lacks a few of the more niche services supported by Reeder, but otherwise hits on any sharing option you'll want to use. Twitter even uses the built-in Mountain Lion's sharing pane, and is ready for integrated Facebook sharing when it gets turned on this fall. 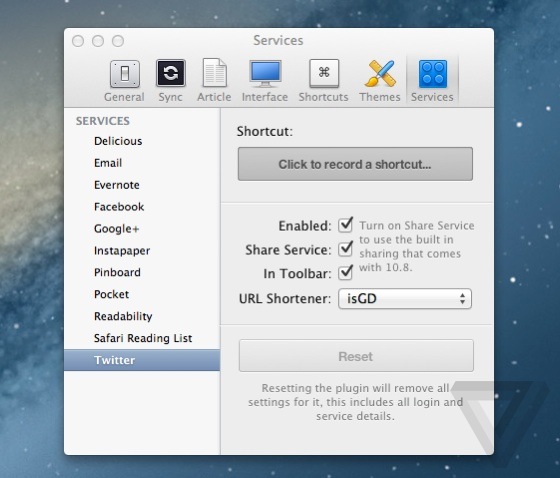 Caffeinated also gets subscription management right — instead of just adding a new feed and having it appear in your top-level folder, users can specify a particular folder directly from the "add feed" interface. You can also easily drag and drop feeds to reorder them or move them from folder to folder; Reeder forces you to open a separate dialog box to manage your subscriptions. Overall, it's a more efficient implementation of feed management.

Unfortunately, if you were hoping to zip your way through articles with trackpad gestures, we have some bad news — gesture support is currently very limited and is far outpaced by the gestures found in Reeder. Caffeinated does have extensive and customizable keyboard shortcuts, but if you prefer your trackpad, this app isn't your best option. Hard recognizes this is a deficiency and told us that more gestures were planned for a future release.

Trackpad gesture support in future versions would be much appreciated

The only other major downside for the app is its stability: on two different Macs, Caffeinated crashed often enough to be noticeable and frustrating. Hard told us that he hadn't heard of widespread issues from users, and things appear to have settled down since the initial setup, but it's still something to be aware of if you're thinking about putting down your hard-earned cash for this app.

Caffeinated's $8.99 price point, nearly double that of Reeder, is possibly the last barrier of entry for the app. While it offers a few features not yet found in the competition, it isn't materially different than existing options that cost a bit less. Still, for some, Caffeinated might be a worthwhile option — Google+ users will enjoy the option of sharing directly from the app, while Mountain Lion users will surely appreciate the Notification Center integration and use of OS X's native sharing services. The app should continue to see frequent updates, as well — Hard says he has no plans for an iOS version, which means he won't have to divide his time between multiple versions of the app (as Rizzi has to with Reeder).

Hard's also offering a 15-day trial of Caffeinated, so anyone hesitant of dropping their cash down can spend some quality time with Caffeinated before making a decision. For my part, gesture support down the line might be enough to get me to switch my RSS feed allegiances. While Caffeinated might not yet be best in class, it's an attractive app with some useful features — RSS users should definitely take it for a test drive and keep an eye on what future releases will bring. Those interested can grab the preview here or purchase the full version at the Mac App Store.