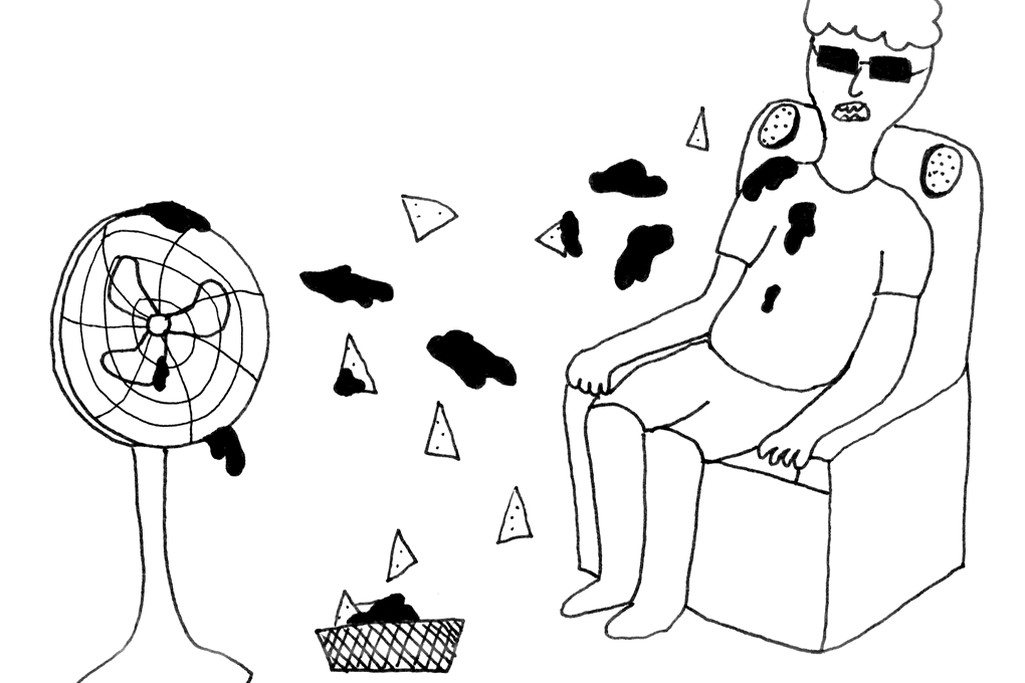 The entertainment industry is dominated by stupid gimmicks, and I love them. Does it glow and / or blink? Tell me more. Does it go all 3D? Here, take all of the cash in my billfold. Maybe it can change color and go from zero to sixty in 1.8 seconds? Here, this is my PIN number. Mexicans, in general, share my passion: their retail corridors are lined with the flashy neon tricks of a Blade Runner street carny, and I often find myself in their homeland resisting consumptive urges at every juncture. Amongst the theater entrances at Cinépolis multiplexes in Mexico there is one distinctive portal, a thick red door jamb illuminated by gently pulsing LEDs, crowned with a plaque reading “4DX” in the raggedly futuristic typeface of a well-used pulsar gun. Needless to say, they had me at 4D. Didn’t even need the X. So I spent the extra 62 pesos and found the one gimmick that left me feeling, for the first time, “I am too old for this shit.” 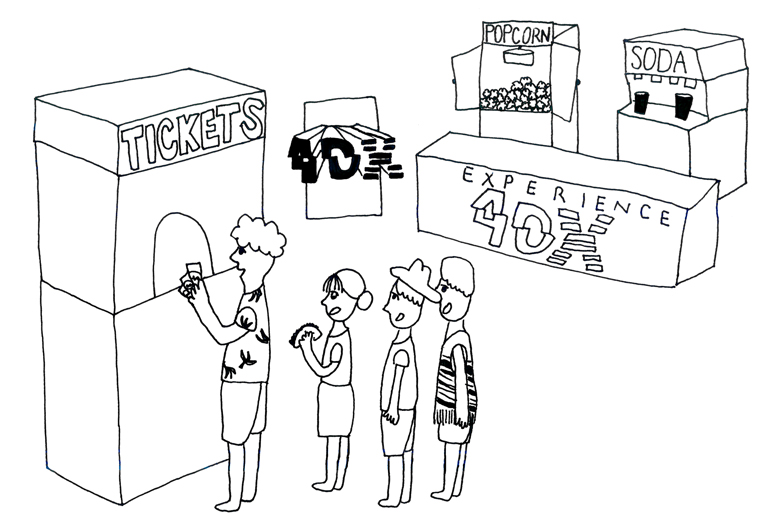 I had missed the last 4DX screening of Prometheus the day before my sighting so I was stuck with La Era De Hielo 4, a sequel three times diluted from its original form. I took my seat alone between families of five and more, the youngest of them giddy with excitement, and took in the surroundings. Ringing the top of the theater was a matrix of directional Vornado-like fans and strobe lights. Each red velveteen seat had a footrest and two speakers embedded in the headrest on either side of an embroidered 4Dplex logo; as an audio guy I was particularly excited about extra-spatial sound positioning. As the the audience was instructed to ponga sus gafas 3-D a mechanical whirring kicked in and lifted the entire row (about eight seats wide) a good six inches off the ground. It was here that I began to notice the similarities to those crazy spaceship-looking “motion ride” rollercoaster / hot air balloon / hang gliding simulation machines I frequented in malls as a child: 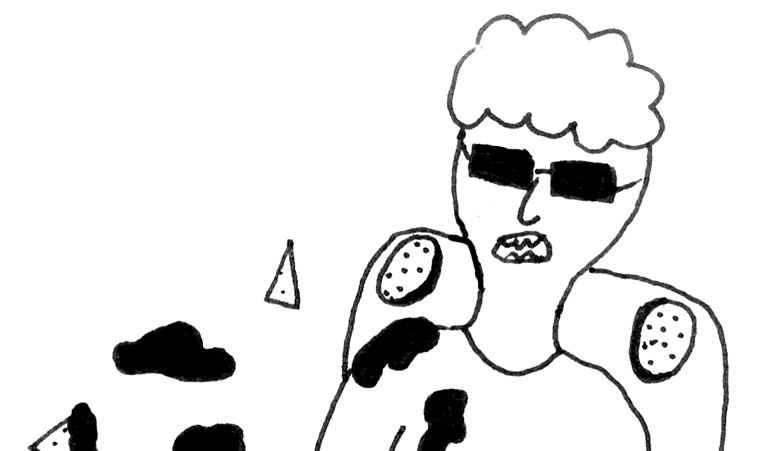 Within moments, we were tagging along with Scrat, a hapless, undersexed sabretooth squirrel whose insatiable acorn addiction leads to a disastrous continental divide. Gentle dips and weaves rocked the audience as the camera followed Scrat underwater; as the drama unfolded those smooth motions quickly gave way to violent shudders. As the ice below his feet cracked apart, our spatial point of view shifted to that of Scrat himself. Fans at the front of the theater jumped into action, sending powerful gales over children’s faces, but just a second after it should have, leaving the motion programming somewhere short of the “realistic” feeling. The motion also loses its subtlety with larger movements: I felt more like I was about to get dumped onto the sticky floor below than plummeting him into an icy prehistoric crevasse. Since I was seated at the end of the row, farthest away from the fulcrum around which the motion was originating, I was also experiencing more extreme movements than were the children sitting in the center. Things were not feeling like the future of entertainment. 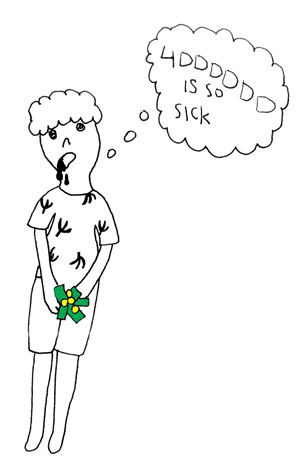 As the story progressed the audience was introduced to lesser and lesser-thrilling elements. In any scene that involved water — and there were lots of them — a maritime sentiment was conveyed through aggressive sprays of water originating from jets embedded in the back of the seat in front of me. While the idea is a fun one, the execution was depressing. Each water deployment action was a wearisome three-step experience: first, the loud hiss signifying an oncoming spray, second, a few milliseconds later, the onscreen action itself, (splashing into the ocean, feeling the brunt of a wooly mammoth sneeze, etc), and finally, a good half-second after the initial hiss, arrival of moisture on the face, sometimes a nasty combination of spray and spit presumably due to irregularly-shaped jet orifices. The process amounted to a cringe / giggle-inducing temporal and tactile mess.

During more contemplative dialogue-based scenes amongst a family of wooly mammoths, their lines overacted by Spanish-speaking approximations of Cameron Diaz, Drizzy Drake, Dennis Leary, and Nicki Minaj, I got bored. My attention began to turn to flaws in execution, an acute problem for a poorly-tuned theater. One of the surround speakers behind my right ear was a few milliseconds off; the janky delay marred any beauty the sound design was meant to impart on the production. Those speakers embedded in the seat never made a peep. A periodic squeal betrayed a poorly-lubricated seat actuator motor somewhere in the audience in front of me, and as windy scenes faded away, the sound of the Vornado-like fans winding down took me further away from the artificial reality.

As the film drew mercifully to a close yet another effect took shape as a lightning storm developed over a cloudy sea. Fog machines hidden throughout the base of the theater began to belt out a cloudy murk, adding to the onscreen haze — a well-enough-executed effect save for the fog’s haphazard effect on the active-shutter 3D glasses. Precisely-timed strobes cut through the storm in a convincing imitation of lightning, which faintly brought to mind images of a party rock discoteque I had experienced days before in the Federal District. As the scene moved to clearer climates fans gently cleared pushed away the smoke. Perhaps the programmers were speaking to my rave heritage here, a good note to end on. Not good enough to fix that fucked-up surround speaker, though. That bugged me all the way to the rinky-dink closing credits.

In an industry that doesn’t matter that much, gimmicky shit is actually the ticket to sustained development. Almost universally, every incremental advance in recorded entertainment is looked at down the slopes of frumpy ol’ noses of jaded critics. If these people had their way we’d probably be watching our uncle hand-draw reruns of The Patty Duke Show on a cave somewhere near the fertile crescent. Luckily, those people have little to do with reality; simple-minded American consumers like myself drive the continued development with their maxed-out credit cards. Inside this Mexican fourth dimension, though, I joined that legion of naysayers as a weathered consumer of gimmicks.

CJ Group, the Korean cineplex developer behind 4DX, hopes to bring 1500 theaters into its version of the fourth dimension by 2016, up from the 29 currently in Mexico, Korea, Thailand, and Brazil. Aside from the two million dollar retrofitting cost per theater, there are a lot of reasons I don’t see this making a huge splash in the USA anytime soon. Most of them have to do with the litigious nature of our society. I can already see the BuzzFeed headline about an elderly woman spilling hot coffee on her lap during a chase scene in 6Fast 6Furious: Baja Drift, or a wayward toddler getting tossed underneath a row of lurching cinemagoers. And concessions? Nope: no nacho can be properly dipped in this climate; the classic bag of buttered popcorn would fare poorly in this wet, windy safari ride. No Coca-Cola exec in their right mind would allow this craze to take hold north of the border. 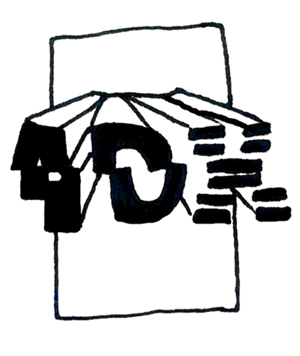 Just for shits n’ giggles let’s shelve the legal drama and assume, half a billion dollars later, that 4DX makes its way to 200 theaters here over the next five years, as GJ Group is attempting to do. The markets where 4DX currently exist seem to have been chosen as a direct response to the rampant piracy that already takes a huge chunk of revenue away from traditional movie ticket sales. Being a physical experience, 4DX is currently impossible to pirate (let’s talk again in a few years when SkyMall is selling home 4D kits), so it gives viewers an added incentive to venture into Cinépolises as opposed to real or virtual black markets. American content piracy isn’t at those levels yet, and it will probably take years to get to Mexican levels; the revenue gains made on would-be pirates in the USA will be relatively smaller than those in other countries for some time to come.

There’s also a potent issue of quality control. The costs and complexity associated with water jets, actuating motors, fog machines, fans, strobes, and loudspeakers must be incredibly high. Mexicans apparently have a far more laid-back attitude about film reproduction than Americans do. Scratched, slightly out-of-focus projections and uncalibrated sound are more accepted by audiences there. Americans, who pay about twice as much for tickets, have a much harder time enjoying themselves in the presence of flaws, and big cineplex chains here don’t mind issuing refunds for, say, an IMAX Hunger Games screening that wasn’t as many stories high as a customer thought it was supposed to be. If there isn’t a team of skilled technicians in-house to oil motors and dispense fog machine fluid before every screening, I don’t have a hard time imagining 4DX getting immediately shit upon by every critic at Yelp, The Los Angeles Times, and Twitter.com at its debut. 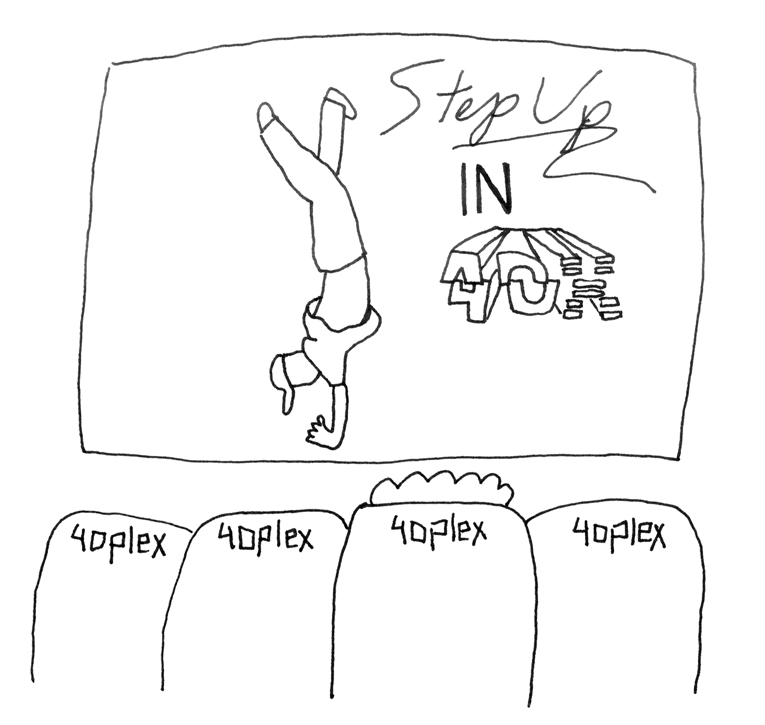 By the time 4DX finds its economic and artistic comfort zone as a mass medium, I have a feeling we’ll be edging closer and closer to the Dollhouse / Demolition Man / Philip K. Dickian sci-fi dream of accessing audiences’ neurons directly, stimulating them in infinite dimensions, free of real-world manipulation. I predict a lot of cross-pollination of ideas between creators of that world and the 4DX world as both are concerned with simultaneously creating and suspending discrete realities for their audiences. That world will cater to certain types, but I think traditional 2D / 3D films will continue to develop as a separate medium. Right now 4DX is simply tacked on to existing productions. The fourth dimension, at this point in its evolution, is far more of a distraction than a narrative device; once we start seeing big-name produced exclusively for 4DX, things should get a little more interesting.

Like most gimmicks, I’ll give 4DX another shot, hell yeah. Maybe it’s all Ice Age 4’s fault. I’m pretty bummed I missed the spray of Alien4 blood all up in my face that Prometheus surely provided, and I’m already contemplating a trip down south to catch the enhanced version of the latest installment of the impeccable Step Up series. So grab all your mallrat friends and meet me at Plaza Coyoacàn, k? I’ll be the gringo sitting alone in the back row rockin’ nacho cheese all over my full-length Cleopatra Coleman bib, enjoying this beta reality product as wholeheartedly as my consciousness will allow.