The Bernie Madoffs of Bitcoin? As market heats back up, virtual hedge funds claim fantastical profits

The Bernie Madoffs of Bitcoin? As market heats back up, virtual hedge funds claim fantastical profits

As the market for Bitcoins gets hot again, the rise of high-yield investment programs is making some suspicious that they may be pyramid schemes.

The market for Bitcoin — the digital currency of choice for the tech-savvy libertarian set — is hot again. The price of the popular online currency has steadily risen over the last six months, and the number of Bitcoin transactions per day has increased roughly 400 percent since May. The resurgence has several causes: the debut of a popular Bitcoin betting game, increased interest from Europe, and the growing success of the underground illegal drug bazaar, Silk Road. But the currency’s rebound has coincided with a relatively new phenomenon in the Bitcoin financial sector: investment funds that promise sky-high returns based on secret strategies.

So-called "High Yield Investment Programs" are suddenly being heavily advertised, promising to use investors' Bitcoins to trade large volumes, engage in complex arbitrage, and otherwise bet on the market in lucrative ways. The creators of these programs promise to pay out as much as 12 to 18 percent a month or 6.75 percent a week in returns to investors. The number of HYIPs posted in the "Lending" section of the Bitcoin Forum offering north of six percent is increasing. But suspicion is growing that these HYIPs may be nothing more than good old pyramid schemes, in which the money from new recruits is used to pay the earlier investors.

"This is going to be the next black eye story for Bitcoin."

"This is clear cut. This is Ponzi 101," said Bryan Micon, who has publicly taken up the issue. Micon is a professional poker player who became interested in Bitcoin about 18 months ago and now works on the Bitcoin poker site Seals With Clubs. He noticed the abundance of HYIPs as soon as he discovered the Lending forum. "I realized Lending was literally filled with scams. It really pissed me off too... this is going to be the next black eye story for Bitcoin."

Micon posted a list of HYIPs he had identified as scams, igniting a debate that became a 40-page long thread on bitcointalk.org, the Bitcoin forum that serves as the community’s hub. (Earlier this week, forum moderators moved the HYIPs out of the main Lending forum due to lobbying by Micon and others. The HYIPs now appear under the rather neutral-sounding subforum "Long-term offers.")

Last month, when one user posited that HYIPs could be the "Bitcoin Killer app," Gavin Andresen, the lead developer on the Bitcoin project, replied without mincing words:

Good advice that I expect will be widely ignored: only invest in what you know.So-called high yield investments are (almost?) always dressed-up Ponzi schemes. If you "invest" in them then please lick your wounds quietly when they implode. And if you're one of the lucky few who make money on them, don't expect me to admire your investing wisdom, any more than I'd admire the number-picking brilliance of a lottery winner.

"I think any 'investment' that promises low-risk high-interest returns is almost certainly a scam. My general advice would be to avoid investing in anything that you don't understand," Mr. Andresen told The Verge in an email. "That includes Bitcoin!"

The idea of a Bitcoin "Ponzi scheme" isn't new, nor is it necessarily considered bad. The first generation of pyramid schemes were more transparent. The Bitcoin Randomizer was a blatant pyramid scheme that paid out earnings according to who got in first. The Randomizer was like a lottery or a gambling game, with low stakes and potentially high returns. Other schemes including Bitcoin Matrix and Bitcoin Pyramid operated similarly with payouts according to referrals.

The idea of a Bitcoin "Ponzi scheme" isn't new, nor is it necessarily considered bad

By contrast, the new HYIPs sound more like Bernie Madoff's hedge fund, claiming to earn huge returns through a secret investing formula. In May, Bitcoin Magazine ran a cautionary story about the phenomenon. "Over the past five months, the Bitcoin community has seen the emergence of savings funds offering interest rates far higher than any seen in the traditional economy," the story read. "More recently, however, the interest rates seem to have lost all sanity."

One "high risk fund" at the exchange MyBitcoinTrade teased a 20 percent return every month for six months. A fund called "Joker's Dragon BTC Investment Fund" promises a 300 percent profit. Bitcoin Savings & Trust, an invite-only operation run by the psuedonymous pirateat40, advertises a seven percent weekly return on deposits of more than 25,000 BTC, a sum worth more than $275,000 at the time of writing. How does BS&T achieve these returns? "If I told you then I couldn't do what I do," pirateat40 says.

BS&T in particular has become a target of suspicion. Many of the other HYIPs are "pass-through" funds, which simply turn around and invest in BS&T. There's no evidence that BS&T is a scam, however. The Verge talked to a member of the BTC Police, a group that monitors and investigates Bitcoin theft. No one has complained of losing money to BS&T, he said. Still, BS&T and other HYIPs are promising returns that strike many as too good to be true.

One could argue that there are two main groups using Bitcoin, a virtual currency released in 2009. Bitcoin was designed to be self-regulating, without the need for a central authority to back it or control it. The code provides for a steadily increasing money supply, user-powered verifications of transactions, and a greater degree of anonymity than can be found with mainstream forms of payments. 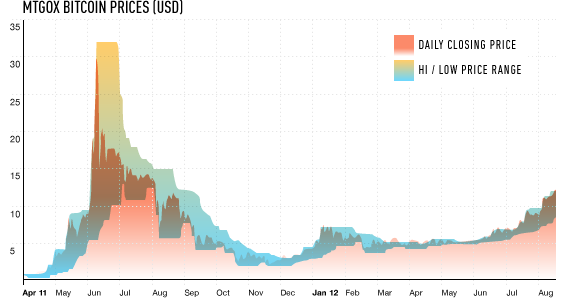 The price of Bitcoin since April 2011, when it began to peak.

There are those who use Bitcoin as a currency; that is, for commerce. It’s now possible to buy everything from books to legal services. Bitcoin Jobs, ForBitcoin, and Bitgigs provide listings mostly for coding work, but there’s also the occasional ad for translation, artwork, and various other things ("I will Send 20 nude photos of my girlfriend for 1.00 BTC," reads one offer).

Then there are those who simply trade Bitcoin, taking advantage of the currency's volatility to make bets the way professional traders swap euros and yen. These two groups overlap considerably, but the currency's popularity as an investment vehicle has at times distracted from its adoption as a unit of money. The Bitcoin economy is still so small that large trades can swing the market, making it difficult for vendors to price their goods.

"The Bitcoin adoption rate is rock steady, and more and more people are investing in Bitcoin for its many virtues," Mark Karpeles and Gonzaque Gay-Bouchery of Mt. Gox, by far the biggest Bitcoin currency exchange, told The Verge in an email. "But we do not believe that we have reached the climax of the Bitcoin just yet... there will be many more years before Bitcoin reaches the minimum level of adoption for it to transition from an 'Investment Tool' to a 'Serious Tool' to compete with other means of payment." 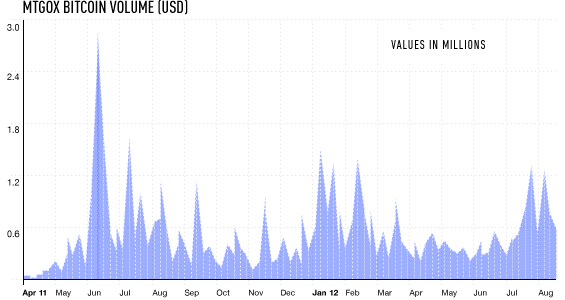 Bitcoin trading volume since April 2011, when it began to peak.

Theft and security breaches have undermined Bitcoin's viability as a currency from the beginning. Speculation, which can lead to bubbles and busts, is also destablizing the currency — especially as investment schemes get more complicated, grandiose, and high-risk.

As the Bitcoin investment sector matures, it is starting to mirror the US investment banking industry’s trademark complexity. The Bitcoin Global Stock Exchange allows Bitcoin startups and entrepreneurs to issue shares, bonds, futures, and other financial instruments. As one Bitcoin trader told this reporter last year when the Bitcoin derivatives market was just getting off the ground, "Bitcoin is like Wall Street was 15 to 20 years ago when I entered. Fragmented markets, wide spreads, manipulation, the trading stone ages." And in the absence of a Bitcoin credit rating agency, it's impossible to tell which operations are legitimate and which are being held together by string.

Is there a Bitcoin bubble?

Although Bitcoin seems to be rebounding, these trends have elicited skepticism along with bullishness. There's reason to be cautious. Bitcoin is a relatively new currency. In lieu of a government or central authority, Bitcoin is essentially backed by a sophisticated technology of unknown origins; a small development team; and the faith of its users. Intense speculation and recurring cyberattacks by the equivalent of information superhighway robbers have made some people rich and others poor.

Last summer, the price of a single Bitcoin hit an all-time high of $31.91. The currency’s value rose incredibly quickly, and the peak was reached after a surge of media interest in the e-currency experiment. Then a sudden crash sent the market into a tailspin, the mainstream attention dwindled, and in November, the price hit $1.99. The dramatic volatility suggested the market for Bitcoins had been fueled by hype.

One could argue that any time or money invested in Bitcoin is high-risk. But as the technical core of the new economy and the supporting infrastructure evolve, the basic bet looks less risky. " The ultimate goal is to form a 'closed loop' economy where people both earn and spend bitcoins," Mr. Andresen said in an email. "I still call Bitcoin ‘experimental,' and still tell people to only invest time or money that they can afford to lose... but every month that goes by both the core system and the supporting infrastructure (exchanges, e-wallets,merchant solutions, storage solutions, etc.) become less experimental and more reliable.

The Bitcoin Project will be making a major announcement in September that should contribute some stability, he said. Still, he predicted things will continue to be exciting in the world of Bitcoin with "continued controversy and chaos."

The number of HYIPs promising champagne profits certainly adds to a bubbly atmosphere. Optimism is returning, but as Bitcoin climbs back up to $12, some are beginning to wonder: Is there a Bitcoin bubble? The well-respected startup investor Fred Wilson recently solicited opinions about the state of Bitcoin on his blog. "Bitcoin is still very much a fringe thing and is tiny as these things go. Compared the the volume of transactions Square will do with Starbucks, Bitcoin looks like a joke," Mr. Wilson wrote. "But I like to pay attention to the jokes, the laughing stocks, because occasionally they get the last laugh."

More from this stream All about Bitcoin: the rise and trials of an anonymous virtual currency