Last week, Google ran an ad for its AdWords service in a print edition of The Globe and Mail, a leading Canadian newspaper.

Google's advertising strategy took a turn for the sly last week, when the search giant ran an ad for its AdWords service in a print edition of The Globe and Mail, a leading Canadian newspaper.

The ad, embedded below, was recently spotted by Globe and Mail reporter Steve Ladurantaye, who posted it to Twitter along with a caption that read: "An ad for Google ads in today's Globe demonstrates the value of print ads, yes?" Ladurantaye told Mashable that the ad ran last Thursday in both print and digital editions of the Globe, as well as in the National Post, a competing Canadian daily.

The ad may be effective in reaching old media holdouts or perhaps even local businesses, though it also seems a bit heavy-handed. After having already discontinued its Print Ads service, Google is clearly doing its best to push advertisers to the internet — unless, of course, they want to promote AdWords. 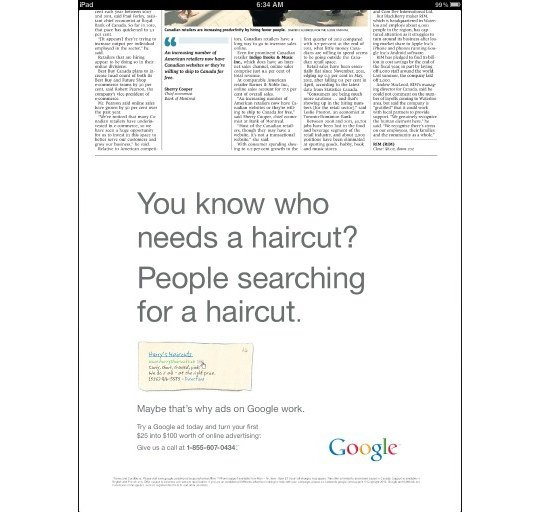