It seems Microsoft is unlikely to update its Office for Mac suite with support for the Retina display found in Apple's new MacBook Pro.

Share All sharing options for: Microsoft not likely to optimize Office for Mac for Retina display anytime soon

We already knew Office for Mac 2011 wouldn't be getting much in the way of new features moving forward, but it turns out there's something else users shouldn't expect anytime soon: support for the Retina display found in Apple's new MacBook Pro. A software update delivered late last month optimized the suite's Outlook email client for the high-res panel but, as reported by Macworld, the company is keeping mum on whether it plans to give Word, PowerPoint, and Excel the same treatment.

In response to a fleet of customer complaints about the software's appearance on Apple's new flagship Mac (one user described it as "absolutely dreadful"), the team said, "Outlook for Mac 2011 already supports Retina Display and the remaining apps will have the same viewing quality as on any non-Retina device." That doesn't bode well for new MacBook Pro owners that until now had chosen Office as their preferred productivity suite. Seeing as how a Mac version of Office 2013 is unlikely, it might be time to give iWork a long look if you can't put up with the pixelation. 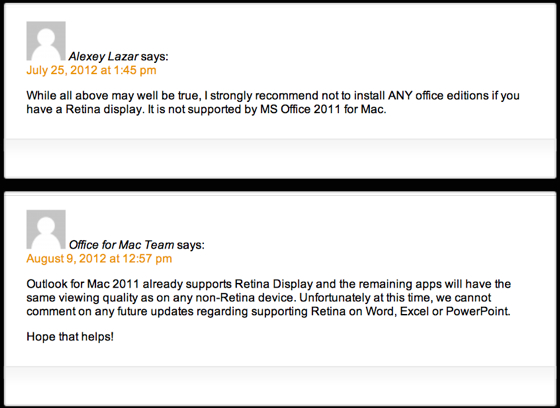