In online campaign, Romney focuses on Obama, both focus on the economy, and neither focuses much on citizens

A Pew study analyzes the differences between Romney and Obama's online campaign styles but concludes that both feature little citizen-generated content and rarely link outside their own ecosystem.

Share All sharing options for: In online campaign, Romney focuses on Obama, both focus on the economy, and neither focuses much on citizens

With about three months to go until the 2012 US presidential election, the Pew Research Center has given us a look at how both major candidates are running their online campaigns. For two weeks in June, Pew's Project for Excellence in Journalism gathered and analyzed everything Romney and Obama's campaigns posted on Twitter, YouTube, Facebook, and official sites or blogs. While the results show some interesting differences in campaign style (and a great deal of overall similarity), one of the biggest takeaways is that despite the web's reputation as a way to spark discourse, both campaigns heavily control the content they post, with few links to outside sources and very little citizen-generated content appearing except in comments. 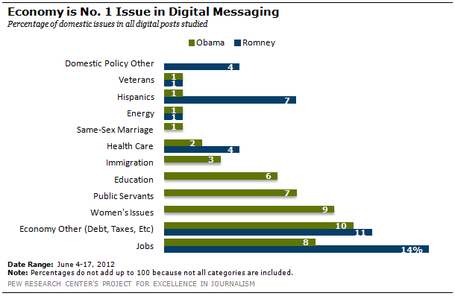 Despite the occasional external news story, 71 percent of the links on Obama's digital posts and 76 percent of Romney's went directly to their respective websites, and only 5 percent of links for either went to a traditional news site, creating what Pew calls a "closed loop" of information. While Pew concluded that Obama's campaign gave more voice to ordinary citizens, this was only in its news blog, where about 40 percent of the posted content (including text or photographs) was made by citizens and many other pieces included quotes from them. Romney's blog tended to focus more on quotes from the candidate or endorsements from prominent Republicans. Obama's campaign answered or retweeted a handful of comments from citizens, and Romney retweeted only once — a photo taken by a citizen but posted by Romney's son. 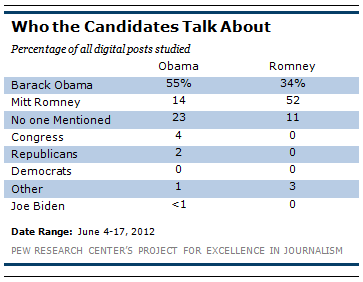 When it came to differences between the candidates and between the 2008 and 2012 Obama campaigns, the results were interesting but not unpredictable. Obama's campaign was more prolific than Romney's everywhere but Facebook, where they posted the same amount of content. During the two weeks of the study, Obama's campaign tweeted an average of 29 times a day, compared to once a day for Romney. Obama tended to post text only or text with links, while Romney preferred photos and videos. And while both candidates spent more than half their posts talking about themselves, 34 percent of Romney's posts were about Obama, while only 14 percent of Obama's June posts were about Romney.

The economy is the leading issue, and Pew notes that foreign policy messages are "all but absent" after figuring prominently in 2008. On his website, Obama greatly narrowed down the number of issues he focused on this time around, while Romney had a larger number. In social media messages, however, Obama talked about more topics than the economy-focused Romney. There's a lot more in the study itself, but regardless of who wins the media battle, there may be a long way to go before social campaigning really deserves the label.