This is my next: Windows 8

When Microsoft's Windows 8 comes out in October, at least one Apple user is making the leap.

Share All sharing options for: This is my next: Windows 8

This is my next is a special feature where writers of The Verge sound off on their latest deep, dark desires from the world of technology.

My MacBook Air and my iPad are basically my fifth and sixth limbs. I rarely go anywhere without them, I use each for hours every day, and in general I'm really happy with both of them.

Come October 26th, though, I'm ditching them both. I don't know yet if I'm buying a Microsoft Surface or a Lenovo ThinkPad Tablet or an Asus Transformer Book, or something else entirely. But I'm buying a Windows 8 device as my only computer, and I can't wait.

I've been using Windows 8 for months, beginning with the Consumer Preview that was announced at Mobile World Congress in February. Back then it was buggy and unstable, with as many problems as it had exciting new features. Now it's a stable, fast, powerful operating system — but that's not why I'll be switching this fall.

I'll be switching because Windows 8 is the first desktop operating system that understands what a computer is supposed to do in 2012, and it’s at once more productive and more fun than any OS I’ve used before.

I should make one caveat up front: I'm assuming that at least one manufacturer will make a decent Windows 8 product from day one. I feel good about that assumption: the Surface looks excellent, as does the ThinkPad Tablet 2. There are sure to be dozens of other Windows 8 options flooding the market this holiday season, and my fingers are crossed that at least one will be worth its asking price. (I'm particularly intrigued by two Asus products: the wacky, two-screen TaiChi and the Transformer Book.)

But I've been testing Windows 8 primarily on a Samsung Series 7 tablet — a decidedly unimpressive piece of hardware — and it's still opened my eyes to a wonderful new way of using a computer. It's the future I imagined with the Motorola Atrix, and again with the Asus Padfone: you have a single device that stores all your data, and you add or remove accessories and peripherals as necessary. I can drop my Series 7 tablet into a dock, add a Bluetooth mouse and keyboard, and connect a monitor — poof, I've got a full-fledged dual-monitor setup going. When I want to go somewhere, I just pick the device up out of the dock, and walk out the door tablet in hand.

I don't have to remember to sync, or transfer my files, or think about which device makes more sense for a certain place or situation. It's like playing with legos, assembling and disassembling different machines from the same parts depending on what I feel like that day.

Forget phablets — Windows 8 is for tabtops

Sure, the transformer thing has been done before, even by devices called the Transformer. Windows 8 is clearly the first OS designed with both capabilities in mind, though, and it shows. Navigating Android via keyboard and mouse is a mess; ditto iOS. But once you're armed with a half-dozen keyboard shortcuts and gestures, Windows 8 is equally easy to navigate with two fingers or keyboard and mouse. I've even found that I'll switch frequently back and forth, depending on what I'm doing; I'll edit photos with a mouse, then pick the tablet up and swipe my way through an article I'm editing, tapping and leaving quick notes with the on-screen keyboard.

It IS the internet 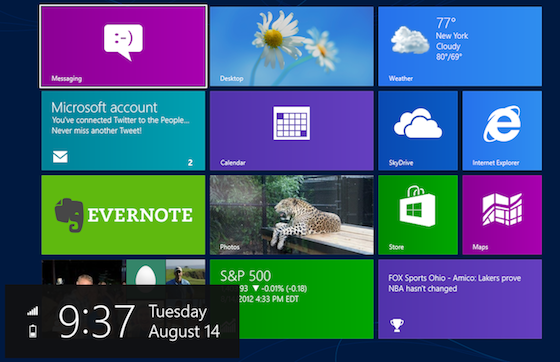 When I reviewed the latest revision of Google's Chromebooks, I had similar Padfone-like futuristic visions — visions of always being online, always being connected, everything always up to date and aware of what's happening in the world. But ultimately Chrome OS is just a browser — a window to the web wider than most, sure, but still a window you have to crawl through to get anywhere.

Using Windows 8 is like living in a house made out of internet. There's a browser, sure (and it's a good one despite being named Internet Explorer), but the whole OS is constantly changing and updating because its every fiber is connected to the internet. As Paul Miller noted last week, the computer itself has morphed from hub to spoke, giving you access to things rather than managing those things itself. Windows 8 fills that role beautifully, and luckily for me I’m not taking a year away from the internet so I get to enjoy the benefits.

The People app, for instance, isn't just a list of contacts you have to manage (or ignore to your peril), but instead a collection of information your friends have added about themselves. If someone changes their phone number on Facebook, I automatically have their new phone number. (Its ability to end the "I lost my phone — need your numbers!" Facebook groups is by itself a reason to upgrade to Windows 8.) News and Travel are alive, always serving new content that I never have to go looking for. On my MacBook Air, I’d say upwards of 80 percent of my time is spent in the browser, but on Windows 8 it’s all about apps and tiles.

Everything funnels through the Start Screen, which borrows heavily from the Windows Phone UI that is apparently not called Metro anymore. The Start Screen is a brilliant innovation for desktop computers, a huge improvement on the folder-littered desktops on every other OS, which serve exactly no purpose except to show a background photo. The Start Screen makes it possible to check a dozen things in five seconds — from any app, just tap the Windows key, and you can check to see if you have a new email, an upcoming appointment, inclement weather, or any breaking news. Tap the Windows key again, and you're back to your original app. Imagine how long checking all of those things would take using Mountain Lion. (In fairness, that could’ve been what the OS X dashboard was, but Apple missed that boat pretty badly.)

Ultimately, that's what I love about Windows 8: without losing any power or capability, it added a ton of the features I love about my phone, from full-screen optimized apps to pretty interfaces to lots of glanceable content. I don't need to spend all my time bouncing between a dozen different apps, because so much information is already surfaced for me. Even the lock screen is more useful, showing messages or calendar events; Mountain Lion just shows me my picture and asks me for my password.

If I want to do more powerful, more complex things, the desktop mode is available and as capable as ever — Photoshop’s not going away any time soon. Most of the time, though, I just want to fire off an email, or read news, or play some sweet sweet Minesweeper. For those things, the Windows 8 experience is every bit as immersive and thought-out as it is on my phone — and it makes the transition between laptop and tablet really well. Even for little things like settings menus and accessing your calendar, Microsoft's latest OS is staggeringly smarter, simpler, better-designed, and easier to understand and use (at least, once you get past the small initial learning curve).

If I were a Windows user, the upgrade would be a no-brainer. But I'm not already a Windows user, and I can't wait to get my hands on a Windows 8 device, toss my MacBook Air out a window (or at least into a closet), and finally start working with an OS that gets how we work in 2012.