The Enough Project, an anti-genocide nonprofit organization, released a report this week on the use of conflict minerals among leading technology manufacturers. Intel, HP, Apple, and Motorola were among the organization's highest-ranked firms.

The Enough Project, an anti-genocide nonprofit organization, released a report this week on the use of conflict minerals among leading technology manufacturers. Titled "Taking Conflict Out of Consumer Gadgets," the report assesses and ranks each company based on efforts to eradicate conflict minerals from their supply chains. Intel, HP, Apple, and Motorola were among the organization's highest-ranked firms, while HTC, Sharp, Nikon, and Nintendo were ranked at or near the bottom, having made little or no progress in recent years.

At issue is a group of minerals including tantalum, tin, and tungsten, all of which are used to produce a wide variety of tech products. Many of these resources are mined in politically unstable countries such as the Democratic Republic of the Congo (DRC), where the value and relative abundance of these metals have fueled oppressive regimes, civil conflict, and human rights abuses.

The Enough Project ranked each company based on its efforts to trace and audit supply chains, as well as its environmental certifications. The organization also considered each company's support for stronger legislation on mineral sourcing. Since December 2010, when the Enough Project released its previous rankings report, most manufacturers have made progress in mitigating the use of conflict minerals (see graphic, below), though none can yet label its products as completely "conflict-free."

The Enough Project identified Intel and HP among its "pioneers of progress," lauding the former for its pledge to produce a conflict-free microprocessor by the year 2013, and the latter for its efforts to foster a healthier, less corrupt mining industry within the DRC. Apple also received a nod for being the first firm to publicly announce the number of smelters in its supply chain, and for leading a smelter training program. On the other side of the ledger were "laggards" like Sharp, HTC, Nikon, and Canon, whose progress "remains far behind industry leaders," along with Nintendo, which "has made no known effort to trace or audit its supply chain."

On the whole, however, things are looking rather positive — a trend that the Enough Project attributes, in large part, to the Dodd-Frank Wall Street Reform and Consumer Protection Act. The law, passed in 2010, requires all manufacturers to audit and trace their supply chains, and to publicly report whether they use any conflict minerals from the DRC or any neighboring countries.

President Obama signed Dodd-Frank into law more than two years ago, though the SEC has yet to issue final rules and regulations on company reporting (a vote is scheduled for August 22nd). Yet even in the face of this delay, tech manufacturers have already begun adopting measures to procure clean minerals, which, according to the Enough Project, "demonstrate[s] the ability of electronics companies to set industrywide standards, drive forward progress on the ground, and move other actors—namely the U.S. government—toward prioritizing Congo." 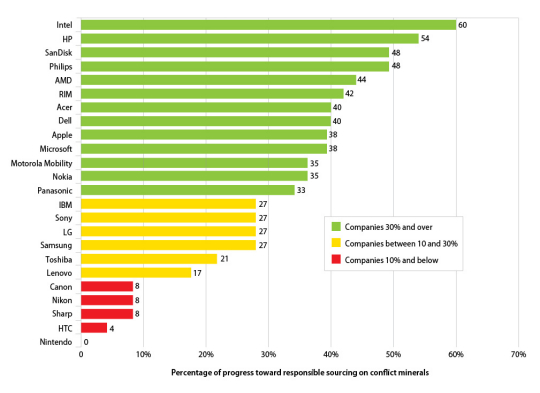