Share All sharing options for: Gidsy, marketplace for city explorers, opens up worldwide

After the blockbuster success of Airbnb, money started pouring into collaborative consumption startups

Gidsy is one of the many young startups born out of the collaborative consumption craze. Essentially, Gidsy is a directory of things to do in a city: graffiti tours, cooking classes, crafty workshops, outdoor activities. These activities are hosted by city residents, who charge a fee like a tour guide. About half the customers are tourists, Gidsy says; the other half are residents looking for something to do or hoping to explore their city further.

The company has 11 employees in an artsy loft in Berlin, dubbed The Maker's Loft, which it shares with Tumblr's German team. Dekker started the company with his brother, Floris, after the two moved to a new city and wanted to find someone to take them mushroom hunting.

Today, Gidsy is going global and introducing a redesign. The so-called "Columbus Release" completes a graduated launch that started in Berlin, expanded Gidsy to 13 cities, then to 60 countries, and now to the rest of the world. Gidsy has also added new features such as "event messaging," which allows organizers and participants to communicate before an activity. With such features, Gidsy hopes to foster a community among activity seekers. The startup's ambassador program, the Gidsy Explorer's League, has recruited dozens of Gidsy power users as evangelists and volunteer beta testers.

"We felt we needed to get some things right (like making Gidsy more social), before opening it up to the world," Gidsy CEO Edial Dekker told The Verge in an email. "Now, we are there. This is the new chapter of Gidsy." 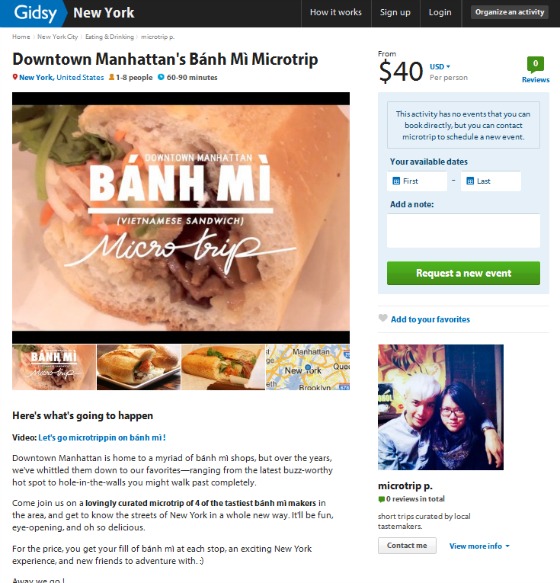 The market for peer-to-peer activities is new, however. It's unclear whether there are enough customers as well as amateur activity hosts to make Gidsy a going concern. However, the idea is compelling enough that Gidsy has plenty of competitors, including New York-based SideTour and San Francisco-based Vayable, which have raised millions from investors. Gidsy's investors include Etsy's Matt Stinchcomb and Ashton Kutcher. Gidsy has a well-executed product and branding, and is heaping attention on its early users, but its ultimate success depends on whether collaborative consumption is merely a fad.