Payment startup Gumroad is hoping to tap into the disruption in the music industry and power web commerce between artists and their fans.

Gumroad is a web payment startup which launched this February, garnered a lot of hype, and quickly raised a total of $8.1 million from A-list investors. The original concept was to create a drop-dead-simple platform for commerce on the web, so that users could sell items as easily as they shared a link. But recently a new class of users has been flocking to the platform: professional musicians like Girl Talk, Wiz Khalifa and David Banner.

The appeal seems to be the lightweight, highly social toolkit for payments that Gumroad has designed. Gregg Gillis, better known as Girl Talk, has long been one of the pioneers moving the music industry into the digital age. Two years ago he released his album, All Day, as a free digital download. Last week he integrated Gumroad on his personal site, offering up tracks and CDs. Users who click to purchase Girl Talk's tracks don't have to create an account or leave Girl Talk's site. They just fill out a pop-up with the most bare bones info: their email address, credit card number, expiration date and CV code.

"We're turning a link into an impulse buy," said Gumroad's Adam Besvinick. "By removing all the hurdles you typically associate with online commerce: account creation, shopping carts, billing address, all that stuff, we create a much more fluid transaction and a lot more business for these artists." When a fan finds the link on Facebook, Gumroad ensures the transaction can happen without ever leaving the social network. The company is working on a similar integration for Twitter.

For a good example of the lightweight, nearly real-time e-commerce Gumroad hopes to enable, check out the rapper Wiz Khalifa, who has been using Gumroad to sell video footage from his current tour. He simply uploads the video and names a price. 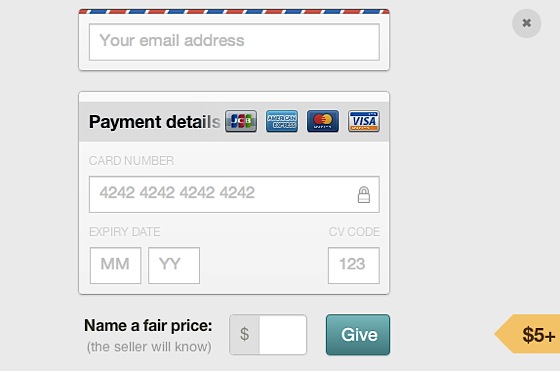 There is a growing group of established artists within the entertainment community who believe that the web makes it possible to forge a direct connection to fans, to do business at scale without the middleman of a record label. Rapper David Banner is using Gumroad for his new campaign, asking 2 million fans to donate $1 a piece in exchange for an album and access to a film. "What I want to show the music industry is that they need us," said Banner in a YouTube clip presenting the project.

"People make the artists and the fans feel like they doing them a favor, when without us, all this shit would crumble." Banner says the plan is to show the labels that artists and fans can connect at scale. It's a rallying cry around digital distribution. "I would like to give a big shout out to Louie C.K. for giving me the influence to even think about this, his movement really showed me what we need to do."

Gumroad is hoping to tap into that disruptive energy. "Facebook, Twitter, and all of these other social tools let people communicate with each other in a way that's more accessible than anything before. They've essentially democratized the ability to be a publisher/influencer online," said Gumroad founder Sahil Lavingia. "We think that commerce will follow that; if a marketplace typically provides three things (distribution, context, and payments), while a social connection provides two (distribution, context), we think that Gumroad can add that third piece to any social connection easily, simply, and quickly — and potentially eradicate the need for 'old-school' mechanisms for selling things in these incumbent industries."