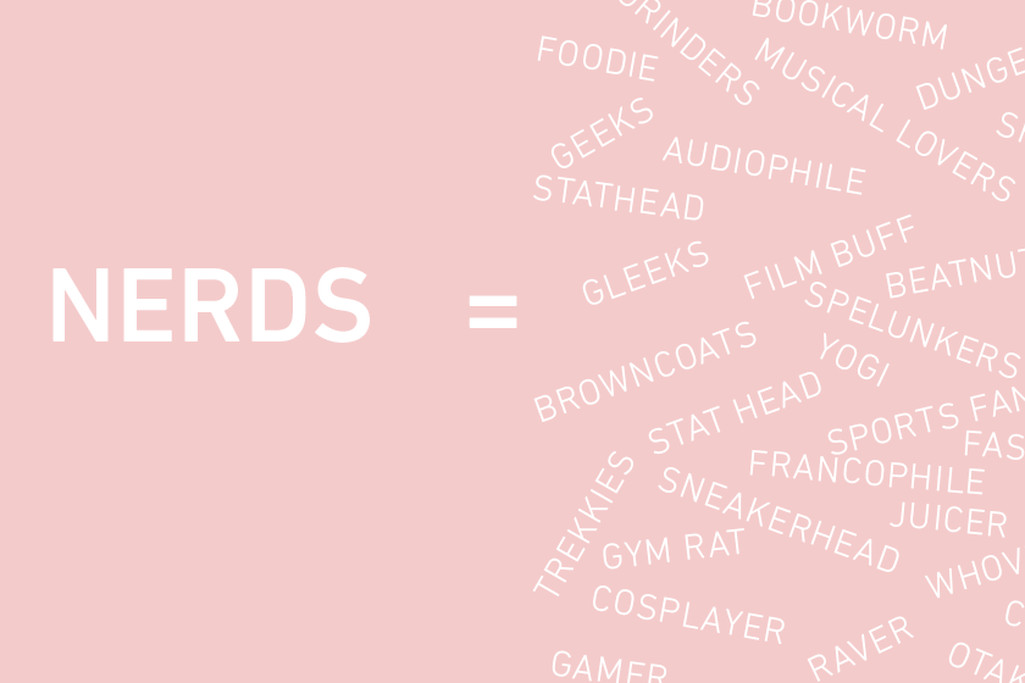 The last few weeks have been awash in nerds and geeks. ChipChick published a guide to dating a geek girl, while CNN decried “wannabe models” pretending to be nerds. Before that came the shootings in Aurora, where media described killer James Holmes as a science-loving geek or a “dark Trekkie-like person.” While these pieces have generated thoughtful responses across the web, eventually they run into the same problem: defining what “nerd” and “geek” are actually supposed to mean.

If you want to cut to the bare minimum, there's a Venn diagram, with “nerd” being the combination of intelligence, obsession, and social ineptitude — in case you were wondering, “geek” involves only the first two attributes. But despite the existence of niche interests like those showcased on the 56 Geeks chart, you're most likely to see the term used around a certain nexus of activities: comics, video games, science fiction, and programming or hacking. If you’re interested in one of those things, you’ll likely be introduced to the rest; I started out as a kid reading Poul Anderson, and by midway through college, I’d been sucked into a vortex of manga, shooters, and IT support.

As plenty of people have noticed, though, none of these things are particularly unpopular. The most highly anticipated summer movie was The Avengers (or perhaps The Dark Knight Rises), and New York's mayor urged Twitter followers to learn to code over New Year's. I, admittedly, inhabit a nerdy and insular world, but on the rare occasion that I venture out of my bubble, people still swap lolcats, play Half-Life, and have opinions on Star Trek (a show that, despite my self-identification, I have never watched). I am not shunned.

Combine this with the long-running fascination with "geek chic," and there's a pervasive undercurrent of anxiety about people appropriating the term. In 2000, American Scientist writer Bryan Hayes took issue with someone who said the then-new AOL-Time Warner merger meant "the nerds have won," wondering how the older, more reserved internet subculture would cope with AOL noobs and the rise of "the com domain." More recently, the "idiot nerd girl" meme proliferated, juxtaposing a teen with thick plastic-rimmed glasses and "NERD" written on her hand with text like "My favorite superhero? Probaby X-Man" or "I love PC gaming; I play FarmVille all day." It’s a meme that hits particularly close to me, since beyond a few areas of expertise, it’s easy to scratch at my knowledge and find the holes underneath.

Passion and knowledge are prerequisites to nerdiness, though the same could be said for almost any label. But beyond that, there’s often an unspoken rule: you have to have suffered. According to Tara Tiger Brown, who gained brief infamy in March for telling off "fake geek girls," true geekiness meant you had to be "willing to forgo social outings and popularity" for your interests, and it wasn't "something you wanted advertised." In fiction, being "nerdy" is shorthand for being an underdog, and real-life killers are described as nerds and loners, providing a narrative for their actions. Holmes was not the first shooter to be widely described as nerdy for his mild disposition and interest in science, nor were his profilers the first to either wonder how he had turned from (presumed) pushover to murderer or assume he inhabited an obsessive fantasy world.

Nerds are described as congenital misfits, people who were all but born obsessed with Firefly and Python. As an anonymous Redditor put it, "it was simply never an option to be anything other than who we are." That doesn't stop it from being seen as a subversive gesture. Benjamin Nugent (author of American Nerd: The Story of my People) describes white nerds as rejecting the generally invisible benefits of their race: "By cultivating an identity perceived as white to the point of excess, nerds deny themselves the aura of normality that is usually one of the perks of being white."

While it's attractive to think that you've had your identity from birth or chosen it purely for its merits, developing the right kind of aptitudes usually takes a support network of fellow nerds, whether friends or parents, and pretending it happens in a vacuum erases the work that goes into following nerdy pursuits and artificially raises the bar for "getting in." There are plenty of reasons people single out women in particular as being fakes, but one of them is the simple fact that female geeks sometimes enter their fields later, whether because they’ve been steered away from supposedly masculine pursuits or just because their interests are seen as less natural by their peers. It doesn’t hurt that social obliviousness — the third pillar of nerddom — is often far less tolerated in women.

In my younger years, I could certainly claim the awkwardness and exaggerated whiteness of nerdiness. Through second grade, I attempted to address my classmates as "Miss" and "Mister," and a teacher exempted me from an explanation of plagiarism because I "sounded like an encyclopedia anyways." I once ignored a tank stopping outside my classroom window because I was concentrating on an exam. But it was never an option to shut out the world completely to focus on my interests, the way that some would-be nerd gatekeepers suggest. And though I was far from popular at my most inept, I wasn’t erasing the benefits of growing up fair-skinned in a region that still carried the vestiges of a white power movement.

Even if nerds aren’t trying for the "cultivated whiteness" described by Nugent, writing up requirements that extend beyond simple passion usually ends up limiting people, not bringing them together. If fashion can’t be nerdy, what is cosplay? If sports can’t be, what about obsessive workout tracking? In fact, when it comes to nerdiness, it’s strange to assume it should be a single culture at all. If nerdiness is indeed the combination of intelligence, obsession, and social ineptitude, why would we think such relatively common traits would coalesce into a community? And if it's a list of specific interests, why do we assert that there's a specific personality type for people who share them? As nerd extraordinaire John Scalzi thoughtfully put it, "there are as many ways to be a geek as there are people who love a thing and love sharing that thing with others."

It's not clear that nerds have "won" anything, but the term doesn't carry the opprobrium it once did. When the profiler speculated that James Holmes might have been a "Trekkie," it didn't sound threatening or foreign — it was practically a non-sequitur, like blaming Rick Astley or Lost. "Slapping on a Batman shirt," a complaint from Joe Peacock’s CNN piece, doesn't make you a nerd, but it doesn't make you an appropriative poser either — it just makes you one of many, many casual fans of the Dark Knight. There will still be people who are ostracized for their social skills or interests, and some of them will like gaming and superheroes, but the term has gone far beyond that. "Nerd" has a definition, and it's used by a subculture, but it’s really a catch-all.

No matter how general the term is right now, though, it can still bring people together if we focus on sharing interests instead of trying to pin down a definition. Different types of nerds already have their own subnodes, like “fannish” science fiction adherents, cosplay aficionados, or PC gamers, as well as older groups like “film buffs.” Far from splitting up the community, these terms give people a way to express the things that make them nerds in the first place, without worrying about whether they’ve ticked enough boxes to deserve the full label. And when people identify as geeks for obsessively liking cooking, the Civil War, or football, nothing is being diluted — instead, the rest of us are just getting more things to learn about.