It may have been Resident Evil with dinosaurs at its core, but Dino Crisis is still an excellent example of classic survival horror.

The easiest way to explain Dino Crisis is that it's Resident Evil with dinosaurs instead of zombies. And while that may sound reductive, it's also very true — and it's what makes the game so great. The change gives Dino Crisis a bigger range of enemies to fear and more reasons to fear them. Being trapped in a room with a frighteningly fast raptor is a lot scarier than being stuck in one with a shambling zombie, and throughout the entire experience you're constantly aware of the T-Rex that's lurking about. That roar is very unsettling.

It's 'Resident Evil' with dinosaurs

Of course, the fact that it sticks to the same basic formula also means that Dino Crisis has some of the same problems as the Resident Evil series. The story is hokey, movement is stilted (though you can actually move and aim at the same time!), and the puzzles aren't so great. But these do little to diminish the overall experience. Back in 1999 Dino Crisis was a genuinely scary game — every time you went down a hallway there was the possibility of something jumping out at you, creating an experience where even the quiet moments were filled with tension. Some of the scares were cheap, sure, but they worked. There were even some slight nods to realism, such as the trail of blood that would follow you when your character was badly injured. And blood, as we all know, attracts predators. 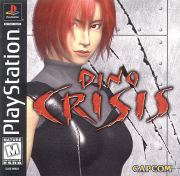 What makes Dino Crisis even more special is that there hasn't really been a comparable game, either before or since — and that includes the two sequels, one of which was literally dinosaurs in space (and nowhere near as cool as it sounds). The speed and cunning of a raptor, the sheer size and power of a T-Rex, these make for some great survival horror, especially when you're trapped in an abandoned military base that's just crawling with them.

Thankfully Dino Crisis is available as a download on the PlayStation Network, so it's pretty easy to relive the experience or even check it out for the first time. And while the visuals and gameplay definitely feel dated by today's standards, that won't stop your heart from pounding when a raptor starts stalking you. Just try to keep from bleeding too much.