While I was surfing the web, I stumbled to an interesting Linux distro called elementary OS. The current version of the OS and the first one released by the team, Jupiter, is based on Ubuntu. It has nothing particularly different from others distros; it is just Ubuntu designed differently. To be honest, it works quite well and gets the job done like any other distro out in the market. But the unreleased next version of elementary OS is going after something much bigger than just being another Linux distro. Luna has as objective to do make the most simple, beautiful and stable free desktop OS ever made, according to my judgement and the looks of it.

What strikes me the most about Luna is that it has a different road map than Ubuntu, Mint and most distros that release a new version every 6 months or so, instead it plans to release the OS when it is ready. Normally, Linux distros are released so fast because the developers want to incorporate new versions of the technology their distros are based on. For example, when a new version of Ubuntu is released it includes the latest kernel. According to the team behind elementary OS, their vision is to create a OS for people who are used to typical desktops like Windows and OSX. If it wants to achieve that goal it must be fast, reliable and well-designed. This is something that cannot be conceived releasing it twice a year. That`s why the developers are taking their time to polish every aspect of the OS and offer something truly unique and different from other competitors.

Linux distros are not known for their cohesive design across the entire system. They use different technology, which comes from different developers, and their apps tend to make the OS looks like a disaster many times. Other distros offer a design that do not adjust to a large people's taste. I know of many people that hate Ubuntu`s orange and purple combination to death. Ubuntu is not the only one that suffers from this. The guys behind Linux distros have failed to design an OS that satisfy people in general as does OSX. Luna tries to solve this problem by imitating OSX. It also adds some clever ideas to the pot. The light grey, black and metallic look is the same across the bundled apps. This gives the sense of unity, something that most distros lack. Again this is something that takes time. I do not see as a developer myself, how someone or a team can update a OS with new technologies while keeping the overall design untouched. If Linux distros try to make a good OS overall rather than one running the latest technologies, they would be more successful without doubt. 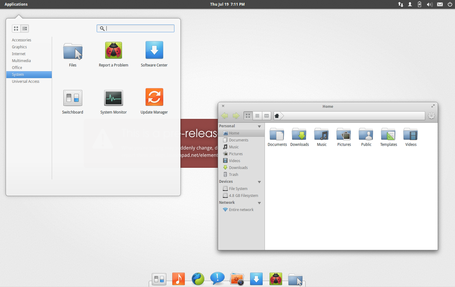 The picture above shows an OS that does not look intimidating like most Linux distros. The OS`s design looks really professional and polished. I do not see rough edges from what my eyes can see. If they keep it as it is and perhaps give some polish where it is needed it will get the crown as the best looking distros. In this case, the overall theme is light. A la` OSX but lighter with some difference in the buttons layout and shape. The point is that it feels unified under the same vision. The constancy of its design is quite high for a Linux distro. This is the first time that I see a Linux distro with such a cohesive design.

Now, let`s talk about a area where distros struggle the most: user interface. There has been a lot of debate about how the new user interfaces are a mess for the public in general. Perhaps, this is the most important part at the time of choosing a distro for your computer since that is how users see and use their computers. For more on this see how Ubuntu lost the throne to Mint thanks to the infamous so-called Unity interface. Not to mention the king of hated user interface: Gnome 3. On the other hand, the UI of Luna does not try to be fancy or make a breakthrough, which most of the times end up being a "disaster" as Torvalds likes to call these unfriendly interfaces. Instead it has a built-in launcher with a hot corner that keeps all the apps. This UI works extremely well for the most part. It is very minimalist and functional, it reminds of the times when the OSX releases were about simplicity and getting the job done without fuss. That was the main beauty of the OS after all.

When people talk about Linux, they think about experimental OSes for geeks. Let`s get out of the way, Linux distros crash. This is due to the fact that developers never polish and test the OS properly to get it to the public on time every six month. Plus, they insist on using new technologies with every single release which causes some incompatibilities with some machines that were running perfectly before updating to the latest and greatest version of their distro. I was doing some research on how Luna was developing and found out that most users were pleasantly surprised that it runs really well in spite of being in beta stage. This only means one thing. Luna is actually made for people who want to use their computers seamlessly. The team`s goal is to make it usable in a large numbers of computers without hiccups. This obviously is not the goal of most Linux distros that put all the efforts on integrating new technologies and causing headaches to users. However, this is easier said than done, but hopefully the team can put everything together in a tight and solid package.

Here is a video of Luna in action:

I only hope to see the vision of this OS realized properly. They already got the design, the apps, and the support of thousands of user. But please give Linux a new direction. Linux distros need to change. People don't care about new kernels, underlying technologies or whatever crap developers put so much effort on. Just give us a Linux experience that is on par with Windows and OSX. By on par I mean, good design, no crashes, and a release cycle of at least of every two years.

Please feel free to make comments about Luna and the Linux world.