Friday was an emotional day for the independent developers who have created many of Twitter's most popular apps. The company announced sweeping rule changes on Thursday afternoon that imply hefty consequences for apps from Flipboard to Instapaper. Trouble is, there are still some questions as to what those consequences are.

"Clearly we definitely could be clearer if there is so much confusion."

The latest announcement is the most precise articulation yet of Twitter's attitude toward the apps that have symbiotically latched onto its back like barnacles on a whale. Still, it caused confusion immediately. The post mentioned a few apps by name, including tweet leaderboard Favstar.fm and the tweet storytelling app Storify, which were held up as examples of apps that "enable users to interact with Tweets," a genre that Twitter wants to limit. Founders of Favstar and Storify panicked until Twitter platform lead Ryan Sarver had to clarify that "we mean to call them out as good examples." Sarver continued to field questions, at one point tweeting that "clearly we definitely could be clearer if there is so much confusion."

The edict outlining "stricter guidelines" for Twitter-based and Twitter-enhanced apps went up on Twitter's blog at 3:38 PM; app creators spent the next 24 hours picking apart the 1,600-word post without reaching much consensus. That actually seems to be working out well for Twitter.

The new rules include heightened restrictions for apps "that mimic or reproduce the mainstream Twitter consumer client experience" with more than 100,000 users. But that clause is open-ended enough that developers have resorted to hearing what they want to hear. Twitter has said it will allow the biggest apps to double their users before they must "work with Twitter directly," leading some to speculate that the cap is flexible. The company has given the impression that some apps may be able to strike a special arrangement with Twitter to get more users, but it's unclear how often such deals would be granted. Twitter's shown its ruthlessness before, as when it recently blocked Instagram from using Twitter data to help its users connect with friends.

The user limit is one of many new rules up for debate. A survey of developers who will be directly affected showed wide-ranging disagreement on what Twitter's changes could mean. Opinions diverged around which apps would be affected; armchair verdicts were varied on how apps will be required to display ads and whether the new rules discourage auto-tweeting.

The four-quartered chart Twitter used to break down the types of apps also seemed to generate more confusion than clarity: 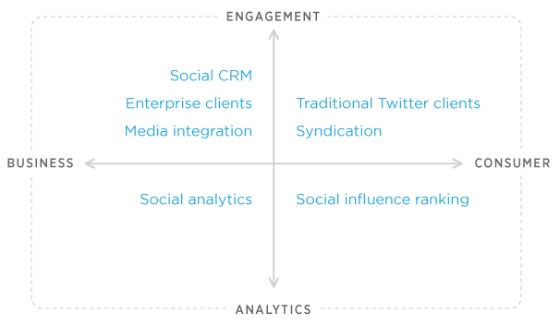 Twitter will "guide" developers of the largest apps, which are now required to work with Twitter directly. Depending on how closely Twitter wants to work with developers, this could be a huge bottleneck. Some have interpreted the 100,000-user threshold to apply to apps like Instapaper that may have features that resemble Twitter.com or Twitter's official apps.

Rob Kuschik, founder of Bad.gy, which describes itself as "SEO for social," was optimistic about the new rules. "We feel validated by this announcement," he told The Verge. And while Twitter has left many questions unanswered, he said, he's excited by Twitter's vague promise to "guide" developers.

However, "if you're building a Twitter client app, that's probably not a good idea," Kischuk said. Most developers The Verge spoke to believed the announcement was the nail in the coffin for clients such as Hootsuite or Echofon, which mimic most of Twitter's features. And yet Andrew Stone from Twittelator, a Twitter client, took the announcement to mean that "Twitter has provided a way for us to keep going for a while." Paul Haddad of Tweetbot, another Twitter client, is also staying the course. "We're going to continue to work on the apps," he said. "Even given the caps we still have a lot of room to grow and a lot of fans of our apps."

Nick Vlku is the CTO of YourTrove, a pre-launch startup that grabs content from your social media accounts and incorporates them into one big, searchable archive. YourTrove is already integrated with Facebook and its founders hope to be able to pull in tweets as well, but Vlku isn't sure if that will be possible. Although he read the rules closely, it's completely unclear how his app will be affected. "I think the real concern is that it really constrains future growth," Vlku said. "Or, it restricts growth in a future direction. I don't know. They mentioned new rate limits. I don't know how those are going to break down... in the end, we probably will have to talk to Twitter before we launch anything."

As a guy who built a successful startup on the Twitter platform, I'm pleasantly surprised at how developer-friendly the 1.1 rules are.

Keeping the rules somewhat ambiguous serves Twitter in several ways. It gives developers some sense of stability while providing plenty of wiggle room so that Twitter can tweak its rules in the future without triggering a total outcry. Vagueness also encourages developers like Vlku to talk to Twitter before building, giving Twitter a pretty good idea of what apps are in development and ensuring that the company gets an early look at innovative uses of the service. "I think they realize ambiguity actually serves their purpose, which at this point is to undermine the third party ecosystem so as to increase control of the full stack Twitter experience," said developer Orian Marx, who first postulated that he and other independent developers were suffering from Stockholm Syndrome in Twitter's captivity back in September of 2011.

Twitter has been able to get away with increasingly draconian rules without scaring developers away so far, but it may yet see a backlash to the new rules. Investors may be hesitant to put money into third-party Twitter apps, which could stifle the next generation of first-class apps like Storify, which extend Twitter's footprint in addition to being loved by many Twitter users. Twitter also seems to have given its blessing to apps like Klout that serve marketers and brands, which could dilute Twitter's current mix of original, funny, and informative tweets with promotional messages.

"There are a lot of things that Twitter has done that have broken the trust and confidence of the developer community."

There's also the possibility that third-party developers will decamp for greener pastures. Facebook remains one of the most popular, robust, and lucrative platforms for independent developers. The recently-funded App.net and the just-relaunched Diaspora both present a less Machiavellian alternative to Twitter.

For Noah Everett, creator of the Twitter competitor Heello and the Twitter-based photo service Twitpic, the new rules couldn't have come at a better time. Heello just relaunched as an app-friendly Twitter alternative after a period of hibernation, and he hopes to snap up a diaspora of developers. "There are a lot of things that Twitter has done that have broken the trust and confidence of the developer community," Everett said. "Why would you want to waste time and money on buiding something when you're capped at how big you can be?"

This attitude is common among entrepreneurs who have been burned by Twitter before. "For the last year, as unclear as they've been, they've been pretty clear: don't build on Twitter," said Howard Lindzon, the founder of the social network StockTwits, which was built around Twitter. Twitter recently copied the core StockTwits feature, a hashtag that collates tweets around stock symbols.

As Twitter attempts to assert more control over the way its platform is used, vague restrictions may be the best defense against Lindzon's brand of pessimism. Consultant and blogger Anil Dash rewrote Twitter's blog post in a chirpier tone, opening with "We have awesome news for Twitter developers." Suddenly, it sounded like Twitter was about to give developers a big boost. By leaving plenty of room left for interpretation, Twitter's ensured motivated developers will find reasons to keep believing in the platform — at least for now.