Earlier this month we heard rumors of the next entries in Sony's NEX line of mirrorless cameras, and now that information has been corroborated by photos purporting to be of the models in question. Chinese site VR-Zone has several alleged images of the NEX-5R and NEX-6, and both cameras look like they'll break some new ground in Sony's hardware design.

The NEX-5R is said to be the follow-up to the NEX-5N and follows the same basic form, but it now has an additional dial up top along with a NEX-7-style Fn button. This increase in the amount of physical controls should make the camera a lot more palatable to enthusiasts than its predecessor. It also seems to have the same 180-degree tilting screen seen on the NEX-F3, but the more important changes may well be on the inside. Sony Alpha Rumors claims that the 5R will have a new 16-megapixel sensor with onboard phase detection autofocus, along with Wi-Fi connectivity that enables support for apps and web browsing.

The NEX-6, meanwhile, looks to slot between the 5R and last year's high-end NEX-7. Its body looks similar to the 7's, but that camera's twin dials have been stacked on top of each other and the top one has been assigned traditional PASM functionality — a first for the NEX line. In another sop to the non-Sony way of doing things, the 6 appears to have a standard hotshoe mount instead of the Minolta-compatible unit found on the 7. The viewfinder is reportedly lower resolution than the OLED unit found inside the 7, and Sony Alpha Rumors says that the 6 will feature the same sensor and Wi-Fi support as the 5R.

We're certainly eager to hear more on these models, and it seems an announcement will either come towards the end of this month or at Photokina in September. The cameras are expected to come alongside three new E-mount lenses including an 11-18mm f/4 wide angle zoom, a 16-50mm pancake zoom, and a 35mm f/1.8 prime. 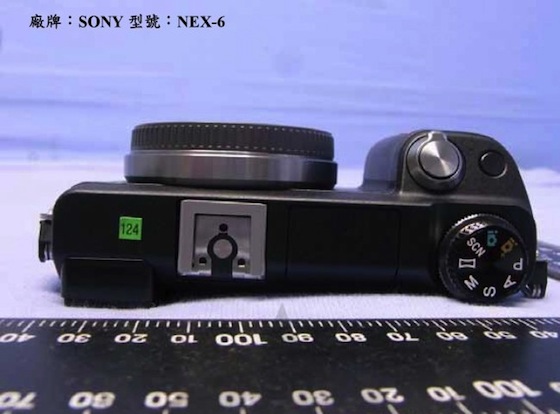 Update: Sony Alpha Rumors has gotten its hands on what appear to be press renders of the NEX-5R. The images show a slightly remodeled grip, a full-size HDMI port, and the 180-degree tilting screen. 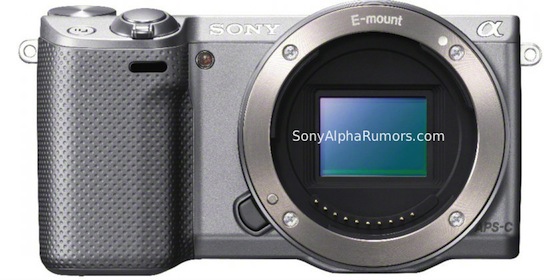 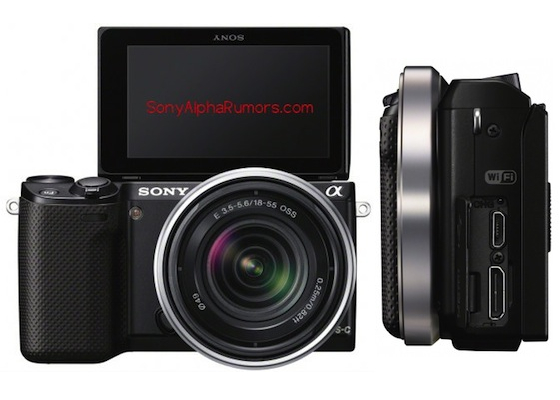