Leaked documents show that RadioShack is planning on launching an MVNO powered by Cricket on September 5th.

All signs suggest that RadioShack is looking to use its iconic name to sell some cellphones and plans. An anonymous tipster has sent us pictures of an internal memo sent to employees describing the new carrier — dubbed RadioShack No Contract Wireless — and the information provided corroborates multiple reports across the web revealing the new service. RadioShack No Contract Wireless will be a mobile virtual network operator (MVNO) that uses Cricket's infrastructure and will be available come September 5th, according to the documents. Phones and plans aren't yet detailed, but the memo explains that it will (naturally) be a contract-free service and that it will attempt to separate itself from Cricket's options with Muve Music and a free 8GB microSD card. Since Cricket does offer prepaid iPhones, we'll certainly be keeping an eye out to see if they make their way over to the new service. We've reached out to RadioShack to try and get confirmation, but for now a RadioShack MVNO seems like a lock for September 5th. 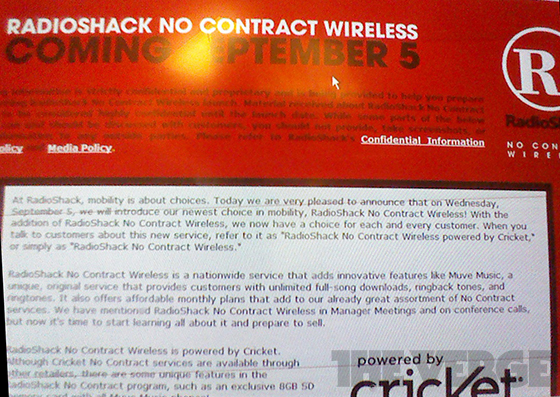