Today, TVguide.com is launching a major update to its iOS app that seeks to combine the video-aggregating features of apps like Viewdini and Fanhattan with social features that take advantage of the growth of "second-screen" TV viewing habits.

This year, an ongoing trend in the mobile video space has been the video-aggregation apps. Apps like Fanhattan and Viewdini attempt to make it easier for consumers to find whatever TV show or movie they want to watch, regardless of the myriad of different viewing options (like iTunes, Hulu Plus, or HBO Go) available to users. Today, TVguide.com is launching a major update to its iOS app that seeks to combine the video-aggregating features of the aforementioned apps with social features that take advantage of the growth of "second-screen" TV viewing habits. An updated Android app is planned for the fall, with Windows Phone support coming at a later, unspecified date.

The biggest new feature is "Watchlist," which lets users search through movies and TV episodes and add them to a queue based on whatever service that happens to offer the desired program. It'll show streaming options like Hulu Plus and HBO Go, paid options like the iTunes Store, and free options like some network websites. Just like Viewdini, when you pick your option, the TV Guide app bumps you out to the selected app and automatically starts playing the video. Included services include the aforementioned iTunes, Hulu Plus, and HBO Go as well as ABC, ABC Family, CW, and Crackle. The major omission here is Netflix, but TV Guide is planning to add additional sources over the next few weeks - though we don't know if Netflix will be among them. Watchlist shows not only what's available for streaming, but also shows that are available through cable on-demand on your TV (for Comcast customers only, at the moment) as well as when the show airs on standard TV.

TV Guide is also hoping to make its app the preferred second-screen companion for connected TV watchers by including a whole host of new social features. For starters, users can comment on or share (over Facebook or Twitter) any of TV Guide's editorial content, something executive VP Christy Tanner told us was of high importance in the new app. As she explained it, TV shows may only run for part of the year, but users want to engage with them all year long to follow "off-season" news. Another feature that was already included on TVguide.com making its way to the app is the "check-in" - like FourSquare for watching a show. Other services like GetGlue have made this a major part of their strategy, but TV Guide is using it to show a trending view of shows people are checking in to, which should provide a nice view of what's popular on any given day.

There are a number of other features (like curated channels, celebrity Watchlists, and notifications built into the familiar TV Guide grid), but social and Watchlist are the big tentpoles that TV Guide is focusing on with this release. While we appreciate the concept of one app that can wrangle in any show or movie we might want to watch, we've had mixed results with the video-aggregation apps we've tried so far - if TV Guide's new app is going to achieve ubiquity, it'll need to include as many services as it can. For those interested in checking out, the new iOS app is available today. 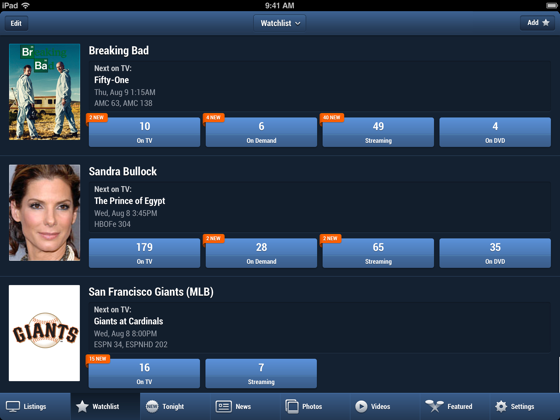