With "great value" comes "great responsibility" and rather than face up to a platform's responsibility to share value with its partners, Twitter is choosing to cease to be a platform for anybody that might potentially siphon it off. When Twitter CEO Dick Costolo said, "What you’ll see us do more and more as a platform is allow third parties to build into Twitter," it seemed like he was talking about APIs and client functionality. What he was actually talking about was money.

Lately, Twitter's rule changes seem to draw a roadmap that consists of a bright red line leading straight towards a walled garden. In its latest move, Twitter blocked Tumblr from using its API to power a friend finder, once again raising a hue and cry across the web and, yes, across Twitter. Behind it all is the same old question: what is the Twitter platform going to become?

Cutting off Tumblr was no surprise, it follows similar moves to block high-profile partners, LinkedIn and Instagram. With LinkedIn, it seemed like a simple-enough story: Twitter makes money on ads, LinkedIn would siphon some of that revenue away by displaying a massive number of Tweets within its own network, and so goodbye partnership. Tumblr and Instagram weren't about displaying tweets, but instead access to the "follow graph." Why cut them off? Twitter gave us a "no comment" response to Tumblr, but it at least was slightly more forthcoming back when it cut Instagram off:

"We understand that there’s great value associated with Twitter’s follow graph data, and we can confirm that it is no longer available within Instagram."

With Instagram, it was easy to spin a story about how Facebook was in the process of acquiring it and Twitter saw no reason to help out a direct competitor, especially when Facebook doesn't allow Twitter users to find Facebook friends. With Tumblr, you could make the case that the new ads represent more direct competition for Twitter, but that seems a little tenuous. Here's a better question: why doesn't Twitter just charge for access to the follow graph? If Twitter was looking to build out its platform and monetize that platform, it seems like a natural-enough thing to try. As Chris Dixon asks:

In a different world, Twitter would have stayed open to all developers, big and small, and found a way to build an ad platform that utilized Twitter’s unique insights into users’ interests but still managed to stay open to third-party developers. In theory, at least, it would have the potential to be a new AdSense, an advertising platform with a deep understanding of its users that enriches both Twitter and its developers. That’s the theory, anyway, but why isn’t Twitter putting it into practice? For starters, it's very, very hard to do such a thing well. As Yaron Galai points out:

Building out a full advertising platform that works on myriad clients and earns enough to pay everybody involved is very hard — perhaps too hard for Twitter to pull off. Still, building the next AdSense seems like an awfully good goal, good enough to at least take a shot at with a few key partners. No dice, though, and our only hint as to why is "We understand that there's great value associated with Twitter's follow graph data."

What exactly is this "great value?" Who you follow on Twitter says a lot about you, it's the kind of demographic data that's could actually be insanely valuable. Dustin Curtis explains the reasoning behind why this follow graph is so important. Compare it to who you friend on Facebook, for example. I'm friends with old high school classmates with whom I have little in common and I'm frankly much less likely to follow a brand page on Facebook than I am a Twitter account: the barrier is lower. I'm also constantly tweaking who I do and don't follow on Twitter, providing the company with near real-time analytics on what my interests are on any given day. With Facebook, it's more about aggregation of friends than day-to-day culling. Twitter's follow graph contains the kind of information that Twitter could use to help advertisers better target me and it could potentially have "great value" if Twitter could find a way to fully monetize it.

With "great value" comes "great responsibility" and rather than face up to a platform's responsibility to share value with its partners, Twitter is choosing to block access to anybody that might potentially keep it from maximizing all possible revenues. Back in June, when Twitter CEO Dick Costolo said, "What you’ll see us do more and more as a platform is allow third parties to build into Twitter," it seemed like he was talking about APIs and client functionality. What he was actually talking about was money. Twitter may continue to be a platform that third party developers can monetize, but only insofar as they build into Twitter itself, perhaps a bit like how it works on Facebook. That's not going so well for Facebook's third party developers lately, but at least in Facebook's case we know what the platform is. Twitter's new card system is still very much a moving target.

The economics of how Twitter is dealing with its larger partners may be obvious, but before this most recent Tumblr drama there was the issue of user caps for "traditional" Twitter apps. There’s no better way to talk about how Twitter regards its third-party ecosystem than to simply point out the chart Twitter published, a chart only an MBA could love: 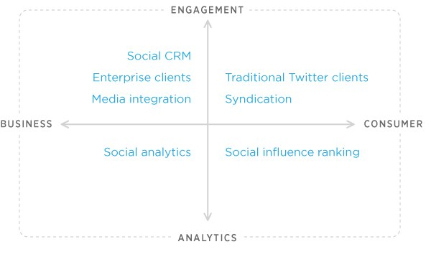 Looking at that chart, Twitter is discouraging apps in the upper-right quadrant, effectively signaling that apps that involve the combination of "consumer" and "engagement" are its domain. That's the official guidance, and despite Twitter's best attempts to discourage them, some developers are still gamely playing along — hoping that the New Twitter will still offer the same opportunities that the Old Twitter did. Given Twitter’s repeated statements, it’s hard not to wonder if the confidence coming from the likes of TweetBot, Twitteriffic, and others is just a little Quixotic.

This chart actually explains quite a bit more than you might expect. If you think about what both the smaller developers and larger social networks have have in common, "consumer engagement" is precisely it. Twitter isn’t building a platform business, it’s building a Twitter business. Anybody that takes away from that, be it a social network competing for ad dollars or a third party app with more than 100,00 users, is apparently a potential threat.

Building a platform means sharing consumer engagement and Twitter's just not interested. It seems to think that the traditional third party developer ecosystem is small enough to be pushed around without hurting Twitter. Given the numbers, Twitter just might be right. If you’re wondering what kind of partnerships Twitter is interested in pursuing, it’s not a secret. The company locked up integration with both Mac OS X, iOS, and a content deal with NBC for the Olympics this year.

Creating a platform like Twitter is impossibly hard, but after years of fail whales, the company pulled it off. Monetizing a platform is harder still, and it looks like Twitter has taken the easier path: monetizing its social graph without sharing the wealth with the developers who helped build it. That's its prerogative, and without deeper insight into the financial imperatives behind it, it's impossible to know whether the company is being reactionary when it comes to access to the "great value" of its follow graph.