IKEA catalog will be 25 percent 3D renders by next year

IKEA is taking steps to move away from traditional photography in its catalogs, according to a report from The Wall Street Journal.

Share All sharing options for: IKEA catalog will be 25 percent 3D renders by next year

IKEA is taking steps to move away from traditional photography in its catalogs. As of now, 12 percent of IKEA's content for its online and paper brochures is rendered rather than photographed, and that figure will increase to 25 percent next year. "It's a clever way to save money," IKEA's head of photography told The Wall Street Journal, "we don't have to throw away kitchens in the dumpster after the photoshoot."

It's not just a financial decision, however, as the furniture giant will also able to easily tailor its catalog for different regions. Apparently, while Japan and Scandinavia are all about light woods, Americans prefer darker furniture, and by going with renders rather than photos, it's easy for IKEA to change colors with the click of a button. To stop the results from being "too perfect," the 3D artists work with carpenters to add wear to the wood and fingerprints to surfaces.

Can you tell render from reality?

The company first included a digital render in place of a photo back in 2005, when three interns created a 3D model of a chair as part of their graduate thesis. IKEA added the render to their catalog in 2006 to see if anyone would notice, and nobody did. The full story at the WSJ has some examples of the renders in the form of a photo quiz — can you tell render from reality? 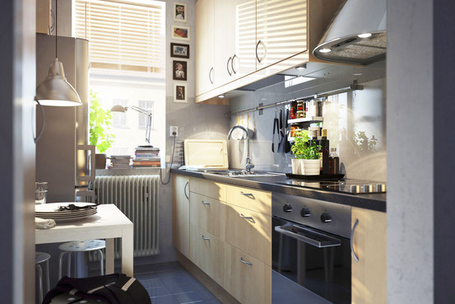