Microsoft and RIM battle for third place, but is four a crowd?

Microsoft and RIM battle for third place, but is four a crowd?

With Microsoft and RIM battling for third place in the smartphone market share race, the question remains: can the industry support both?

There is a business principle that you may be familiar with. The leader in the market, for one reason or another, is always the most successful. The second person can be quite successful, the third one has to struggle, and anybody beyond that probably ought to get out of the business.

RIM's in dire straits; BlackBerry 10, the company's would-be savior, has been pushed into 2013. Microsoft has yet to score a blockbuster Windows Phone. New global market share numbers published in recent days by IDC and Gartner still show no evidence that the industry can profitably support a third mobile ecosystem, much less a fourth. So which of these two next-gen platforms — both from mobile giants who've lost significant traction — can cement its status as a viable player over the long haul? For RIM, it seems that the window to parlay its two-odd decades of mobile computing experience into a new generation of products that can compete favorably against iOS and the world's best Android devices may be closing.

A look into Gartner's global smartphone market share numbers over the last dozen or so quarters reveals that BlackBerry and Windows Mobile / Windows Phone have suffered similar patterns of decline, with one very important difference — Microsoft has started to claw itself back out of the pit: 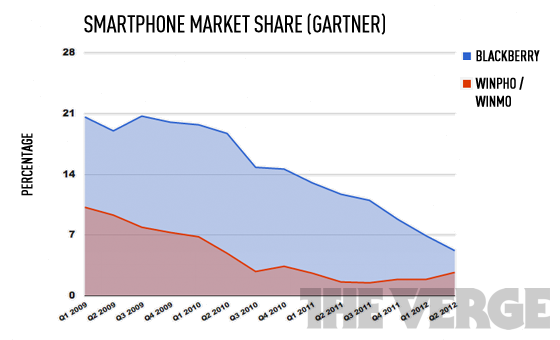 If the market can't realistically support more than three viable, profitable mobile platforms, there are early indications that Microsoft has already jumped into an early lead that will be difficult for RIM to counteract. Windows Phone finally started to see a meaningful uptick in the second quarter of this year, while BlackBerry — dogged by aging product and BlackBerry 10's Osborne Effect — has been losing share hand over fist every quarter since Q4 '09. If both platforms continue in their current trajectories, they'll be neck-and-neck in the very next quarter, and a strong push brought about by Windows Phone 8 and associated products from Nokia, HTC, and others in the fourth quarter will almost certainly push it over the edge going into 2013.

"...we are not trying to copy or to target one competitor in particular."

But is RIM specifically going after Windows Phone in a bid to cement BlackBerry 10's survival? Frank Boulben, RIM's recently-appointed chief marketing officer, wouldn't say so. "The number one thing we are doing is developing and designing a user experience that is truly distinctive. And through that, to have our fair share of the market. So we are not trying to copy or to target one competitor in particular," he told us. "BlackBerry has always been known for a unique proposition in terms of device and services, and that's what we intend to continue and do with BlackBerry 10 with a completely new user experience and user interface and through our applications."

Regardless, Microsoft is in a far better position to win a war of attrition where profitability could still be years away: at last tally, Ballmer's war chest included some $63 billion in cash, cash equivalents, and short-term investments — a far cry from RIM's $1.9 billion — and there's no sign that the company has any intention of giving up on mobile (look no further than Surface, Windows RT, and Windows Phone 8 for evidence of that). It has already taken billions of dollars spent on engineering, advertising, and forging carrier partnerships around the world just to give Redmond the smallest uptick in market share, a nearly imperceptible sign of life in a brutal industry where iOS and Android reign supreme. "In the best case scenario, BlackBerry 10 will be badly behind Apple, Google, and Microsoft in terms of apps, and RIM is not even trying to compete on entertainment and cloud services," says Avi Greengart, research director for consumer devices at Current Analysis. "RIM's challenge is to create a platform that is so obviously superior to the competition in a handful of areas that some users are willing to give up the benefits of larger ecosystems."

"We think there is certainly opportunity for at least three platform offerings in the space."

Microsoft's Greg Sullivan wouldn't comment on RIM's fortunes specifically, but he acknowledged what a difficult market this can be if you're not in (or near) the lead. "There may be no arbitrary limit on the number of viable platforms supported by the hundreds of millions — and potentially billions — of users, but there are certainly diminishing returns past a certain point. We think there is certainly opportunity for at least three platform offerings in the space." Clearly, he believes Windows Phone makes the cut. 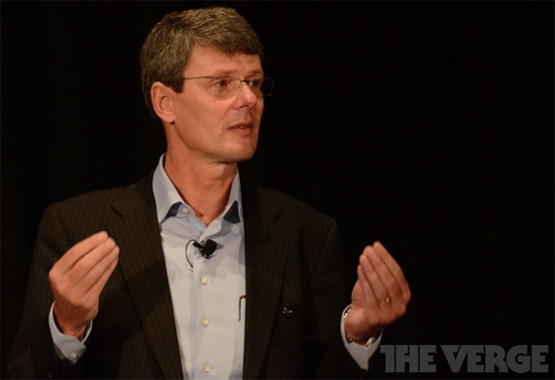 "It's far too early to call 'game over' for anyone," notes Gartner analyst Michael Gartenberg. "Much depends on RIM's ability to deliver BlackBerry 10 with table stakes features, compelling hardware design and a differentiated user experience." Greengart also gave Waterloo's weakened tech giant a sliver of hope: "[CEO] Thorsten Heins told me that RIM 'is keeping certain things close to its vest,' and RIM still has strong assets in enterprise mobility and BBM." With Windows Phone on the uptick, though — and a manic fourth quarter for Microsoft in the making — Redmond won't be making it any easier for Heins to right the ship.