After a surprisingly short time, the jury in the Apple v. Samsung case has sent word that it's reached a verdict. The jury has found vastly in favor of Apple in the case.

After a surprisingly short time in deliberations, the jury in the Apple v. Samsung case reached a verdict today. The nine jurors decided unanimously that Samsung had infringed on Apple's intellectual property, and while Cupertino won't be getting the more than $2.5 billion it asked for, it will be getting at least $1,049,343,540.

Samsung will receive nothing

The jury didn't think much of Samsung allegations of infringement, either. They didn't feel that Apple had committed a single count of infringement — at least not anything that Samsung had demonstrated — against either Samsung's standards-essential or utility patents. As such, the company will be receiving nothing for its troubles.

It wasn't all gravy for Apple, however. The jury found that the company's legal team didn't prove Samsung had broken any antitrust laws or violated its agreements with the UMTS standards bodies. Still, it was a meager get for Samsung, considering the jury also found that Samsung couldn't have enforced its '516 and '941 3GPP patents against Apple due to "patent exhaustion" — in this case, the fact that Intel already has a licensing agreement with Samsung, and the company shouldn't be allowed to double-dip. 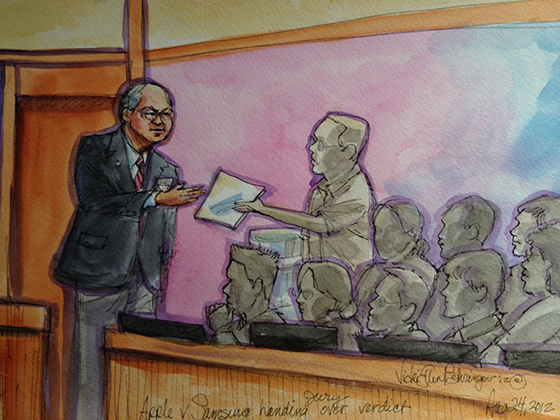 As the verdict was read aloud in the courtroom, things looked bad for Samsung from the start. The first item up was Apple's bounce-back patent — which the jury found Samsung had infringed with every single accused device. Things were similarly grim for the rest of the utility patent infringements, with the jury finding that the majority of the devices infringed. Things didn't get much better when it came to Apple's patent covering scrolling and two finger gestures. Almost every device was found to have infringed, with only the likes of the Ace, Intercept, and the Replenish escaping. Apple's tap-to-zoom patents didn't garner such overwhelming results, but the vast majority of accused devices were found to infringe here as well. As one final dig on the utility patent front, the jury found that parent company Samsung Electronics Co., Ltd. (SEC) had induced the other two entities named in the suit to infringe upon the three utility patents; again only a handful of devices escaped the inducement findings.

Things didn't get any better with the design patents. Despite Samsung's attack on Susan Kare's testimony, the company was found to have infringed the design patent for the iPhone's array of icons across the board. The D'677 patent did almost as well, with just the Ace being found to not infringe. The D'087 patent was the weakest performer for Apple, with just the Galaxy S, Galaxy S 4G, and Vibrant found to be infringing. Apple's iPad patents didn't hold up at all — neither of the Galaxy Tab 10.1 variants were found to have infringed Apple's D'889 patent. SEC was found to have induced here as well; only the Galaxy S II variants and the Tab devices escaped Apple's inducement accusations.

In the build-up to the announcement of the damages, one key finding was the issue of willfulness. Judge Koh could order that Samsung pay even more to Apple if the jury found its infringement was intentional — which it did for all three utility patents and both the icon layout and iPhone front-face design patent.

Not a single Apple patent was declared invalid

As the announcement ran on, the one saving grace Samsung could have hoped for was patent invalidity. If it had successfully proven that Apple's patents weren't valid in the first place, it wouldn't have had to pay anything — and Apple would have found itself with the value of its intellectual property significantly diminished. Again, the jury sided with Apple, deciding that not a single Apple patent was invalid.

Apple did suffer a few setbacks, however. The jury decided that the unregistered iPad trade dress and the iPhone / iPad combination trade dress (consisting of the iOS icons and layout) were neither protectable nor famous. It was a strange decision, given that the jury had found infringement for the design patent covering that same iOS icon grid, but it took two areas of infringement off the table for Samsung. The jury didn't seem to buy Apple's dilution argument — Samsung was particular effective during testimony at attacking the notion — and found that only the Fascinate, Galaxy S i9000, Galaxy S II Showcase, Mesmerize and Vibrant had diluted the registered iPhone trade dress (it threw in the same phones along with the Galaxy S 4G when it came to dilution of the unregistered iPhone 3G trade dress).

Apple struck out on antitrust

Where Apple struck out was in its antitrust claims and argument that Samsung had violated its agreements with UMTS standards bodies by not disclosing the existence of standards-essential patents. Cupertino also failed in trying to prove that Samsung's patents weren't legitimate. Not a single patent was ruled as invalid, despite Apple's arguments to the contrary.

The jury made a mistake

After the verdict was read there was a brief moment of reconsideration on the part of the jury and judge. Samsung pointed out that the original amount of damages awarded — $1,051,855,000 — didn't make sense because the jury had awarded money to Apple for devices it said hadn't infringed in the first place. After going back to reconsider the decision, the jury dropped the damages to the $1.049 billion figure.

The jurors left the courtroom without speaking to the media. Things may be over for now, but the next stage of legal machinations are already underway. A hearing about possible injunctions against Samsung products is set for September 20th, and Samsung has already vowed that "this is not the final word in this case." Still, with such a resounding win, Apple no doubt feels its legal pursuit of Samsung has been vindicated — and the decision will send shockwaves throughout the consumer electronics industry sure to effect both companies and consumers.

More from this stream Apple vs. Samsung: the verdict

Feed refreshed Two hours ago • Not just you

E
Emma RothTwo hours ago
We might not get another Apple event this year.

DirecTV’s NFL Sunday Ticket is having some issues again