Watch this: Samsung's design team tells the story behind the Galaxy S III

Watch this: Samsung's design team tells the story behind the Galaxy S III

Samsung has released a video explaining the design process behind the Galaxy S III.

Samsung has released a video called "Galaxy S III Design Story" which explains the development history of their latest, well-received flagship phone. The company's design team doesn't have as high a profile as that of Apple, which frequently appears in videos to promote new products, but the ongoing trial between the two companies has put the Korean giant's development process under the spotlight. The video features interviews with various Samsung designers, including Jeeyeun Wang who testified in court last week, and sheds some light on how the Galaxy S III came to be.

Much of it is devoted to the influence of nature on the phone's hardware and software, with VP of mobile design Jacob Lee explaining that the company "wanted a more emotional and stronger connection with our customers." Product designer Hangil Song elaborated on how this was reflected in the hardware design:

"Samsung product designers often travel the world to look for inspiration. At the Marina Bay Sands in Singapore I was amazed at the harmony of the sky, the cityscape, and the water. I wanted to express the amazing aspect of the water that is about to overflow from the Galaxy S III's window. During the trip, I also happened to witness the pebbles in a stream sparkling under the sunlight, and I spent a lot of time trying to figure out how to capture the flow of water and the reflection of the light into the design of the phone."

The video is concept-heavy and doesn't go into much detail on the actual physical fabrication of the Galaxy S III, but there are a couple of revelations in that regard. Some of the "unprecedented manufacturing techniques" used include a hand-etched "hairline pattern" designed to give a more natural feel, and several layers of coating on the battery cover that means "even the slightest change in angle creates a reflection that accentuates the graceful design." Product designer Junghyuck Im goes on to say that "by integrating organic curvature of the phone's casing with the square LCD module, we succeeded in achieving a design that conveys compactness as well as naturalness when holding the phone. We put in a great deal of effort and made countless prototypes to achieve this goal." 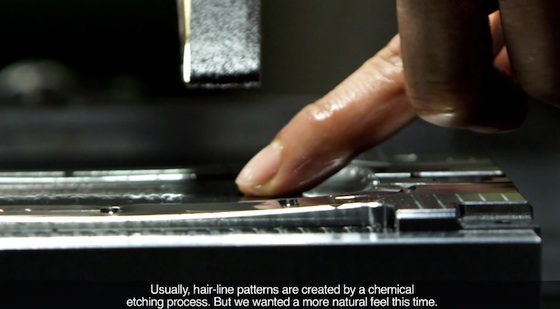 Samsung's Nature UX features audio design with natural sound effects and, while not everyone's a fan, the designers went to great lengths to create the "most realistic" sounds possible. One particular revelation is that the water drop effects on the phone dialer screen are actually the result of dropping water into a cup of orange juice, which was deemed to have the perfect level of viscosity for recording after other liquids like milk and yogurt were tested.

UX designer Wang, meanwhile, says that "since the unlock screen is actually the screen most often viewed by users, we wanted to create pleasant memories out of it and let the users' imagination run. For example, the feeling of running their hands through soft grass or dipping their feet in a stream or feeling the cool breeze while riding a bicycle." This is designed to create a positive first impression of the phone that becomes "more meaningful" the more you use it.

While we weren't entirely enamored with the Galaxy S III's industrial design, Samsung is clearly very proud of its latest flagship device, calling it "an entirely new beginning for Samsung smartphones." There's no doubt that getting to hear some of the decisions that go into its phones makes for a fascinating watch, either — here's hoping the company decides to take a similarly open approach in future.