Evernote and Moleskine have partnered to create Evernote Smart Notebooks, paper notebooks that connect to Evernote in a unique way.

At Evernote's Trunk conference today, the company announced a surprisingly analog partnership with popular notebook maker Moleskine. The two companies created a special, $24.95 notebook called the Evernote Smart Notebook, which is uniquely suited for Evernote users. The Smart Notebook comes with one of two different types of paper; you can take use the Evernote app to take a picture of any page in your notebook, and everything is immediately made available and searchable in Evernote. Evernote's iOS app was upgraded today with a new Page Camera feature that makes the connection work — for now, it looks like other platforms are left out.

The Smart Notebook also comes with stickers that you can use to specify a certain tag or notebook, so that when you take a picture of a page the app will automatically sort it properly. We're not exactly sure how the scanning is better than Evernote's standard character recognition, but either way the Smart Notebook sounds like a great tool for Evernote die-hards. You can pre-order one now, at $24.95 for a small notebook and $29.95 for a larger model, but you won't be able to get your hands on one until October 1st. 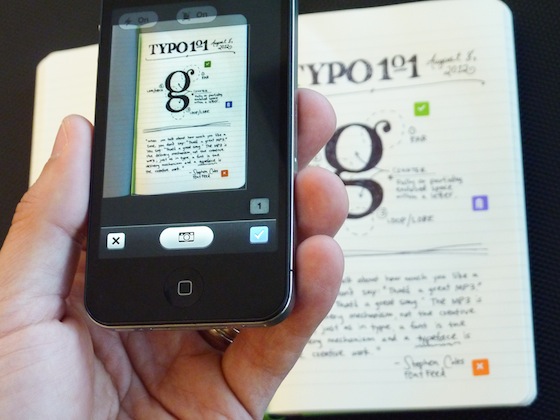