The Classics: 'Another World'

The Classics: 'Another World'

The Verge Classics: Another World by Eric Chahi

There wasn't anything quite like Another World when it was released, and that's largely the case over two decades later. In an age where too many games teach rules by holding hands and tell stories by stopping play, Eric Chahi's 1991 Amiga classic is all the more relevant. Ostensibly a Prince of Persia-style 2D action adventure, Another World set itself apart with its stark visuals, fluid animation, and vivid sci-fi storytelling. Transported to the titular other world after a lab experiment gone awry, you're left to fend for yourself without any guidance. And you will die.

'Another World' certainly isn't afraid to kill you

Another World certainly isn't afraid to kill you. Indeed, many players will die within a couple of seconds of the opening movie; you wake in a pool of water and need to avoid a speedy drowning. Unlike most games of the time, though, you have unlimited lives and are free to learn by trial and (more likely) error. While some of Another World's challenges may seem unfair by today's cushy standards, they tend to operate on a certain shaky logic. Another common cause of death, for instance, is the scattering of leeches on the game's second screen; make a wrong step and they'll nick your leg, killing you instantly. Take this lesson into the next screen, where you meet a huge shadowy beast, and it should be pretty obvious that the only thing to do is run.

It's a difficult game, then, but only sometimes a frustrating one; the simple controls and quick restarts keep you from feeling overwhelmed, and you can finish the story in an hour or two if you know what you're doing. There are parts of Another World that essentially require you to die in order to work out how to progress, but that's no different from a lot of first-person shooters — it's a linear game in which the way forward is always clear, however trying it may be to reach. The mechanics are simple, usually revolving around a gun that vaporizes enemies, creates a force field, or destroys walls depending on how long you press the trigger. While Another World might seem opaque at first, it settles into a consistent rhythm for the patient.

That's just as well, as you'll want to see all the game has to offer. It's amazing how well-realized the world is considering the hardware it was created on, but Another World clearly benefited from its single auteur. Chahi designed and developed the game on his own (though the soundtrack comes courtesy of Jean-François Freitas), which no doubt helped the painterly art style take shape; Another World really looks like no other, with its cool color palette, minimalist polygon characters, and rotoscoped animation. The animation in particular holds up well today, and the way the game seamlessly loops in cutscenes gives it a stylish, cinematic verve. 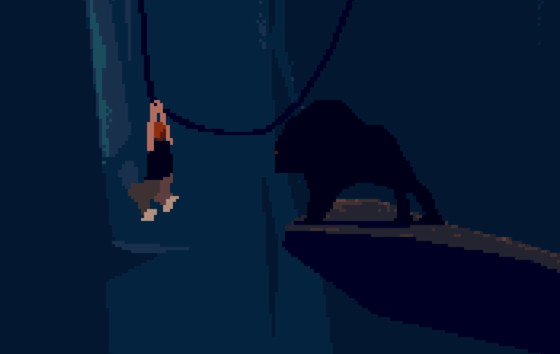 Its true influence is best felt in 'Ico'

Few have tried to emulate Another World directly. Publisher Delphine went on to create a disastrous sequel, Heart of the Alien, and later Flashback used many of Another World's ideas in a more action-based context. Chahi, meanwhile, explored similar themes with the ambitious Heart of Darkness. Perhaps the game's closest descendant is Oddworld: Abe's Oddysee, which has the same blend of occasionally maddening 2D action gameplay in a rich fictional setting, but Another World's true influence is best felt in Fumito Ueda's low-key, contemplative Ico. Both games involve two strangers traversing environmental puzzles in an unfamiliar world, yes, but there's a deeper thread between them; Ueda and Chahi realize that the truly memorable video game stories are shown, not told.

Another World was released on countless systems throughout the 90s and beyond, but if you'd like to play it today you have two easy options. The 15th anniversary reissue for PC is probably the definitive version, with redrawn high-resolution art from Chahi and a wealth of extra material, but for portable play we'd recommend the excellent 20th anniversary edition on iOS and Android.