The Quikdraw (on Kickstarter) is a lens holster that uses the lens' own bayonet mounting system to twist securely into place with a single hand.

Sure, interchangeable lens cameras are versatile, but actually swapping those lenses can be a chore. Riley Kimball wants to sell a clever mechanical belt holster that could not only make the process painless, but look pretty nifty, too. Rather than place your lens in a pouch or bag with velcro, a drawstring or zipper, the Quikdraw uses the lens' own bayonet mounting system to twist a lens securely into place with a single action. You pull a lens off your camera mount, place it against the mount on your belt, and twist to lock it into a holstered position. 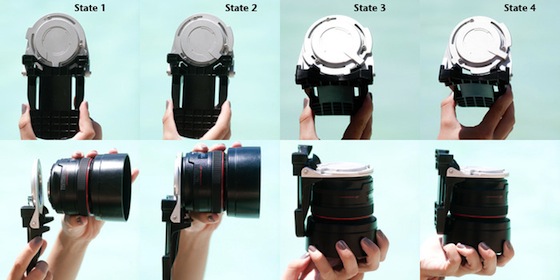 The two-piece mechanical system sounds practically foolproof. As soon as you twist the lens into place a few degrees, it can no longer fall out, and if you twist it further, the mechanism allows the aluminum mounting plate to pivot so that the lenses hang straight down, resting on your hips. Twist it even a few degrees further and the final safety is engaged, keeping your precious glass locked pointing down until you're ready to use it again.

Kimball is trying to raise $100,000 on Kickstarter for both Canon EF and Nikon F mounts, and at our last count he had crossed the $50,000 mark. We're not sure if the Canon mount can hold EF-S lenses, though it doesn't seem likely given the thinness of the plate (Update: Kimball says they work). If you're interested, you can pledge $80 for one, or $180 for two and a belt, and should the project hit its funding goal, Kimball believes he can ship the first small batch as soon as September (for Canon) or October (for Nikon).