AndroidMX has posted up images of what it says is a prototype of LG's upcoming flagship smartphone.

AndroidMX has posted up images of what it says is a prototype of LG's upcoming flagship smartphone, the Optimus G. The model is labeled LG-E973, and features what should now be a familiar spec sheet: a 4.7-inch HD display, 1.5GHz quad-core Snapdragon S4 processor, Adreno 320 GPU, 2GB of RAM, and a 13-megapixel rear-facing camera. The 4.7-inch IPS display, rather than being 1280 x 720 as expected, is listed on-device as 1280 x 768. From the photos available you can clearly make out a row of three capacitive keys for back, home, and menu functions — LG appears to be ignoring the Galaxy Nexus-led trend for on-screen buttons.

The LG E973 is apparently running Android 4.0.4 Ice Cream Sandwich, but neither the hardware nor software is final, leaving room for a potential (though given LG's track record, unlikely) Jelly Bean update prior to launch. AndroidMX expects LG to announce the E973 at IFA next week, but will LG want to share the limelight with Samsung's pre-announced Galaxy Note II? We'll be bringing you the latest news direct from the IFA show floor next week, so stay tuned to find out. 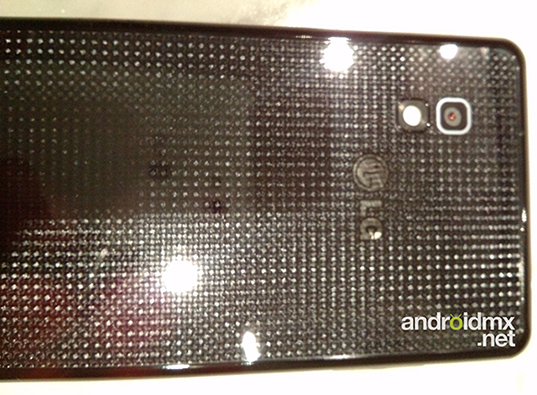