NBC News reports that Neil Armstrong, the first human being to land on the moon, has died.

Share All sharing options for: Astronaut Neil Armstrong has died

Legendary astronaut Neil Armstrong has died at age 82. As the spacecraft commander for Apollo 11, the first manned lunar mission, he became the first human being to land on the moon and step on its surface — where, as he bounced down from the spacecraft's ladder, he famously said "that's one small step for man, one giant leap for mankind." Multiple US news agencies reported the news, which was later confirmed in a family statement released by NASA. The family statement says that Armstrong passed away today "following complications resulting from cardiovascular procedures." 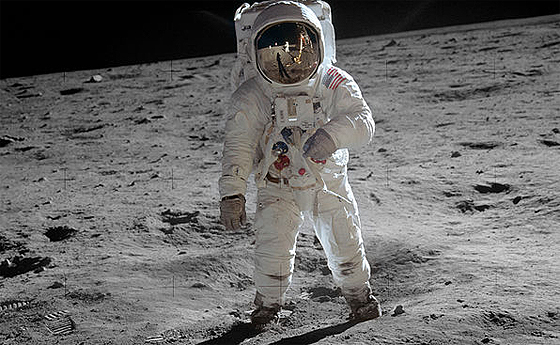 A photo of Buzz Aldrin on the moon's surface, taken by Neil Armstrong with a 70mm Hasselblad lunar surface camera

Armstrong carried a number of daring titles over his long career. Shortly after his 20th birthday, he became an officially qualified Naval Aviator, and flew dozens of missions in the Korean War. Following his service with the Navy, Armstrong earned a degree in aeronautical engineering from Purdue University in 1955. He continued his career as an aviator after graduation, becoming an experimental test pilot. In 1962, he was asked to join the NASA Astronaut Corps, and eventually flew space missions in the Gemini and Apollo programs.

On July 20th, 1969, Armstrong and astronaut Edwin "Buzz" Aldrin spent three hours on the moon's surface, where they collected rocks, planted a US flag, took photos, and even spoke to President Richard Nixon on the phone. Since the moon landing, the pictures and words from Armstrong and Aldrin have inspired future generations to take interest in science and space exploration.

Armstrong's moon mission was his last, and he later became the Deputy Associate Administrator for Aeronautics at NASA in Washington, DC. Just a year later, he left to become a professor of aerospace engineering at the University of Cincinnati, where he lived with his wife Carol until his death.

While Armstrong was born in the United States, his accomplishments touched the lives of people across the world. In a statement issued by the White House earlier today, President Barack Obama said that "Neil was among the greatest of American heroes — not just of his time, but of all time," and that "he delivered a moment of human achievement that will never be forgotten."

Neil Armstrong was a hero not just of his time, but of all time. Thank you, Neil, for showing us the power of one small step. -bo

Neil Armstrong today takes his place in the hall of heroes. The moon will miss its first son of earth.

"Even though we were farther away from Earth than two humans had ever been, we were not alone"

Armstrong's contemporaries and admirers have also responded. In a statement obtained by Buzzfeed, fellow astronaut Buzz Aldrin says that "Neil and I trained together as technical partners but were also good friends who will always be connected through our participation in the mission of Apollo 11." Aldrin says that "whenever I look at the moon it reminds me of the moment over four decades ago when I realized that even though we were farther away from Earth than two humans had ever been, we were not alone."

Gabby and I are both sad to hear of the loss of Neil Armstrong.He was an icon of exploration and a great American. He will be missed.

Neil Armstrong was the spiritual repository of spacefaring dreams & ambitions. In death, a little bit of us all dies with him

"The next time you walk outside on a clear night and see the moon smiling down at you, think of Neil Armstrong and give him a wink"

Armstrong's family says that "while we mourn the loss of a very good man, we also celebrate his remarkable life and hope that it serves as an example to young people around the world to work hard to make their dreams come true, to be willing to explore and push the limits, and to selflessly serve a cause greater than themselves."

"For those who may ask what they can do to honor Neil," his family says, "we have a simple request. Honor his example of service, accomplishment, and modesty, and the next time you walk outside on a clear night and see the moon smiling down on you, think of Neil Armstrong and give him a wink."

Michael Shane contributed to this report.