The recent Apple v. Samsung trial has gotten my gears turning with regards to Google and their role in the Android ecosystem. With the lawsuit, I think it was pretty obvious that Samsung was heavily inspired by Apple and went through a lot of effort to straight up copy them in some areas (look and feel of hardware, completely redoing Android's homescreen to include colorful rounded rectangles, etc.). The question is, how has Google avoided this? And what should they continue to do?

Edit: If you're interested in a closer look at Android's design, take a look at The Verge's Visual History of Android.

Some people forget that, while they're not technically manufacturing them, Google has experience with developing Android hardware. Google's been subtly sidestepping Apple (and their array of patents) by guiding the manufacturers in the design process. 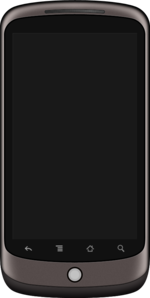 The Nexus One kicked off this trend; it was a collaborative process by Google and HTC, and it was beautiful. With a 3.7" display, it was slightly larger than the iPhone, but not unwieldy. The unibody design was unique, the shape was unlike the iPhone, and it was a great device. The hardware buttons were very unlike the iPhone, sporting four capacitive buttons and even including a trackball. 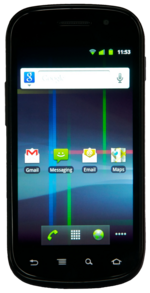 Google's next Nexus device was the Nexus S, a collaboration with Samsung. while Samsung was pumping out infringing Galaxy S devices, Google steered them in a different direction for their Nexus. They kept Samsung's sleek unornamented display, but curved it to avoid the "flat" aspect of Apple's claims. In addition, they stuck with the nonuniform corners to again avoid Apple's claims.

They knew to stay away from the iPhone's look and feel, and they did so successfully while still creating a pretty nice-looking device.

Apparently Google liked working with Samsung, so they continued with their next Nexus phone. The Galaxy Nexus was in some ways an evolution of the Nexus S; it again came with a curved display, nonuniform corners, and a different build style.

At this point, Google was ready to beat Apple at their own "unornamented" game; they dropped hardware buttons entirely and moved Android to an onscreen approach. Remember, at this point Samsung was dishing out the still-infringing Galaxy S II without design input from Google. It lacked most of these differentiators from Google's design input. 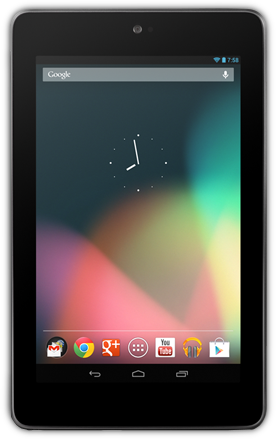 For Google's first official Nexus tablet (a collaboration with Asus), they decided to avoid Apple's territory altogether and to jump into the 7-inch market. That alone differentiates them quite a bit from Apple's iPad.

In addition, the Nexus 7 has a different screen ratio and nonuniform bezels around the display. Google again went with a buttonless front, while the back differs significantly from the iPad with its rubbery leather-like texture (as opposed to aluminum).

While working with manufacturers on the Nexus devices, Google's also been pumping out updates to it's stock Android OS. They've been relatively careful to avoid straight-up copying Apple with it, and there are some pretty important ways they've continued to innovate rather than infringe.

One important area (which actually came under scrutiny with a lawsuit) is the lockscreen. In early Android versions, the lock screen was an ugly gray rectangle and the user had to press a physical "menu" key to unlock the device.

In Android 2.0 (Eclair), the lock screen was completely redone. It was somewhat reminiscent of a rotary dial: the user swiped an unlock icon across the rotary and the phone unlocked. There was also a sound icon which could be swiped the opposite direction to toggle the device's sound/vibration state.

In Android 2.1 (still Eclair) tweaked the lock screen a bit more. Instead of a predetermined rotary path, they changed to a pull tab style, while keeping the unlock icon and sound icons the same. It was still a left-to-right swipe and the tab could only be pulled in a straight line from the left of the display to the right. 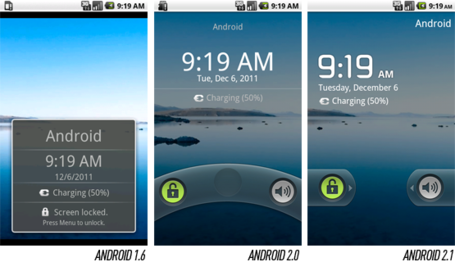 With Android 3.0 (Honeycomb), Google changed the lockscreen more significantly. The lock icon now sat in the middle of the unlock area instead of at the left side, and swiping it in any direction unlocked the device.

Android 4.0 (Ice Cream Sandwich) brought a smaller change. Apparently Google looked at the unlock patent again and decided to stick with the left-to-right motion for unlocking; they added an unlock symbol to the right of the unlock area along with a camera icon to the left, allowing easy access from the lock screen. With Android 4.1 (Jelly Bean), Google simply added another shortcut, this time above the lock icon and pointing to Google Now.

In each case, Google looked at their functionality, how it could be improved design-wise, and how it could do so in an innovative (non-copying) way.

Google knew to avoid the bounce-back effect in lists, and simply excluded any similar feedback in earlier versions of Android. With one of the first major redesigns of Android in version 2.3 (Gingerbread), Google decided to add some feedback in a unique way. When a user hit the end of a scrollable list, an orange glow burst out from the end.

This was true everywhere except for the "all apps" screen and home screen. In All Apps screen, Google used a 3D-scroll-type interface where the icons scrolled on to/from the Z-axis. Once the user hit the end of the apps list (or let go after going farther than the end), the list would snap back to line the icons up. For the home screen, Google went with a similar snap-back effect where the home screen would snap back into alignment after scrolling stopped.

In Android 3.0 (Honeycomb) and 4.0 (Ice Cream Sandwich), Google toned down the end-of-list glow a bit and took a different approach for the home and All Apps screens, furthering themselves from the Apple claims. They moved the All Apps screen to a paging interface (more similar to the home screen) and went with a 3D tilt-effect; attempting to scroll past the end makes the home screen or icons tilt on their Y-axis to show that you can't go any further. It's a subtle but impressive effect, and something that's patently different than Apple's approach.

In addition to the aforementioned scrolling differences, Google has been careful about how they implement the home screen in Android.

Android, unlike iOS has always had a differentiation between the home screen and the All Apps screen. In addition, Android has almost always had more than just icons in a strict 4x4 grid; from early on, Android has supported customizable widgets across its home screens. With the Nexus 7, Google even seems to be moving away from icons on the home screen (at least by default) in favor of large content-centric widgets. Widgets can also be resized and are intelligently adaptive depending on the other contents of the home screen.

When Google originally implemented folders in Android, they were an ugly and difficult affair. The user had to long-press the home screen (or hit the menu button and tap "Add"), tap on "Folder," then could drag icons into it. They then had an old-school manila folder icon on their home screen which, when tapped, would show the contents.

After Apple introduced drag-and-drop folders in iOS, Google decide it was time to revamp theirs as well. Instead of having to add them through the menu or a long-press, Google, too, went with a drag-an-icon-on-top-of-another approach. They were careful, however, to differentiate the look and feel quite a bit; instead of a rounded square with icons side-by-side, Google chose a circle with icons stacked and skewed 3D-like. Instead of splitting the screen like iOS, tapping a folder comes up with a smooth dark box containing the app icons.

Google, the master of search, has also had to be careful around Apple's claims with regards to searching on a mobile device. Earlier Android devices contained a hardware search button which would pull up Google search from the home screen or an app's search interface from within an app. In addition, Google offered a search widget that users could place on any of their home screens. This widget allowed users to search the web via Google as well as within other apps that plugged into it.

In Android 3.0 (Honeycomb) and 4.0 (Ice Cream Sandwich), Google added a persistent search bar to the home screen. This also allowed the user to search the web with Google and kept the pluggability. Apparently Apple had an issue with this, as they successfully (though temporarily) got the Galaxy Nexus banned from sale in the US. 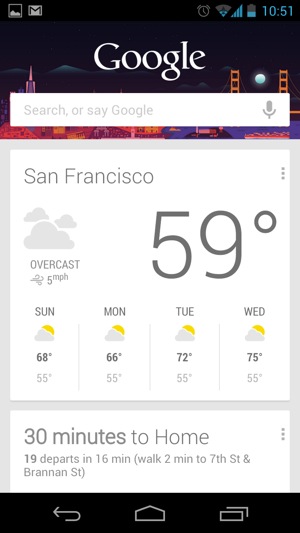 Google significantly revamped search in Android 4.1 (Jelly Bean) by introducing their new search product, Google Now. The persistent search bar stayed, but it now pulled up Google Now with its fancy prediction and useful cards. It now intelligently pulls in weather, driving directions, sports scores, and more without the user even asking. They also tweaked the way it searched both the web and the device, side-stepping Apple's patent. In addition, they countered Apple's Siri by offering a similar (but often faster) voice search and actions within Google Now.

What This Means for the Future

Now that Google has a significantly different yet equally polished look and feel of its own for Android, it should be easier for them to keep innovating without infringing or copying preexisting work. In addition, Manufacturers should start changing Android less and less on their devices. We're already seeing this a bit from HTC—their newest incarnation of Sense is less invasive/heavy than before—and hope to see it from the other manufacturers as well.

Google is rumored to be pumping out a handful of Nexus phones this coming winter. We presume they will continue their trend of steering their hardware partners away from potentially-infringing hardware designs while continuing to innovate with better displays, cameras, and materials.

In case you missed it, Google straight up bought Motorola's mobile division. While they haven't done much with it yet, we can expect to see carefully-designed hardware from them in the future.

What do you think?

Do you feel Google has done a good job of avoiding Apple's claims, or do you think they still need to go farther? What type of innovations would you like to see from Google? How else can Google and Android manufacturers differentiate themselves from Apple? Sound off in the forum below.

Edit: Updated title to "How Android has evolved while steering clear of Apple's designs" from "How Google has avoided Apple's patents, trade dress, & other claims" because it sounds better (and it's what The Verge put on the front page). Revised the lock screen section in response to a comment and further research.

Thanks for all of the feedback, the recommends, and the front page mention!