Facebook is adding a new Frank Gehry-designed building to its Menlo Park campus that will house 2,800 engineers.

Share All sharing options for: Facebook's Gehry-designed campus expansion will start next year

Facebook is adding a new building to its Menlo Park campus that will house 2,800 engineers. The building is designed by internationally-renowned architect Frank Gehry, whose work includes the Walt Disney Concert Hall in Los Angeles, 8 Spruce Street in New York, and the Dancing House in Prague, Czech Republic.

In a note on Facebook Menlo Park's page, Facebook Environmental Design Manager Everett Katigbak says the Gehry took into account the engineering culture of the company. "It will be a large, one room building that somewhat resembles a warehouse. Just like we do now, everyone will sit out in the open with desks that can be quickly sheffled around as teams form and break apart around projects." The new building will be surrounded by newly-planted trees, and a garden will span the entire rooftop. Katigbak says the Gehry-designed building will supplement, rather than replace, Facebook's current campus, and an underground tunnel will connect the two. 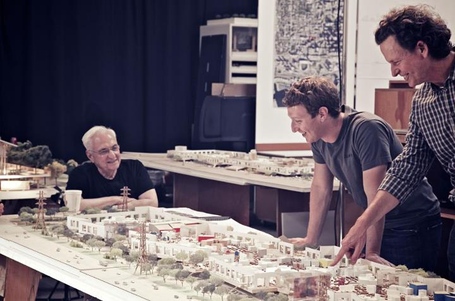