Samsung adds yet another screen size with Galaxy Player 5.8

Samsung adds yet another screen size with Galaxy Player 5.8

Samsung has announced the Galaxy Player 5.8 featuring a 960 x 540 LCD along with front-facing speakers, 1GB RAM, 16 or 32 GB of onboard storage, and a variety of education-focused content preloaded.

After the 3.6, 4, 4.2, and 5.0, you can now add the 5.8 to Samsung's Galaxy Player range of PMPs. Announced today in South Korea, the Galaxy Player 5.8 features a 960 x 540 LCD along with front-facing speakers, 1GB RAM, 16GB or 32GB of storage, and a variety of educational content pre-loaded. Design-wise it's reminiscent of a bigger and thicker (10.8mm) Galaxy S III, and with Android 4.0 on board it should be more usable than some of Samsung's past Players.

We're not without questions regarding this device, however — for instance, with such a large screen on a media-focused device, could Samsung really not have sprung for an HD panel? There's no pricing information available right now, but in an age of excellent $199 7-inch tablets Samsung's decision to continue pursuing the PMP market strikes us as a little odd. Then again, without a release confirmed for countries outside Korea it could be intended as little more than a niche device. 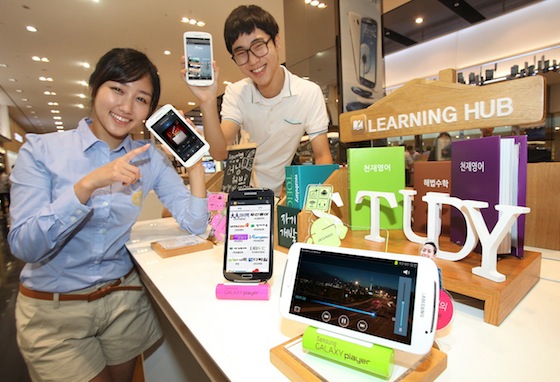