Drafts note-taking app for iPhone gets redesign and iPad version

The Drafts note-taking app for iPhone and iPod touch has been updated with major UI changes, coinciding with the release of an iPad version.

Share All sharing options for: Drafts note-taking app for iPhone gets redesign and iPad version

Drafts, a popular note-taking app for Apple's iPhone and iPod touch, received a major redesign last week, coinciding with the launch of a long-awaited iPad edition. Known as Drafts 2.0, the latest small-screen version also includes new features such as the ability to append notes to existing files in Dropbox and link detection for phone numbers, email addresses, and web links. This functionality is mirrored in the iPad version, which makes use of the tablet's larger on-screen keyboard for simpler writing and editing, as shown below. 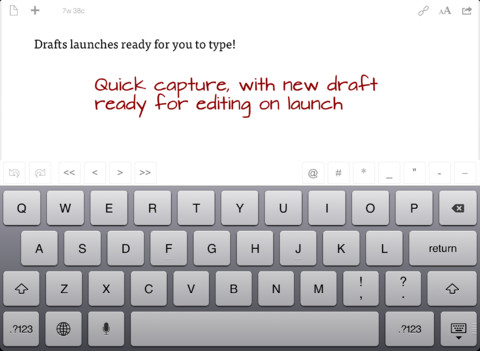 Drafts aims to improve on the experience of a number of text-focused apps by placing writing front and center. Upon opening, the app confronts the user with a simple blank page — once text has been entered, it can be stored in services such as Dropbox and Evernote, sent to social networks like Twitter and Facebook, or simply emailed. Drafts for iPhone and iPod touch is available for $1.99 in the App Store, while the new iPad version costs a dollar more.