Sony isn't just prepping an update to its Android tablet line — it's also got a Windows 8-ready VAIO hybrid with an 11-inch display in the works, Pocketnow has learned. We don't have specs, but the VAIO Duo 11's backlit keyboard collapses on a sliding hinge into what appears to be a relatively thin traditional tablet; that's a different tack than Microsoft is taking with the Surface, which is available with a couple of optional (and innovative) keyboard attachments. The Duo 11 is shown with a pen, which obviously means it has pen input; that may also suggest that it's not a Windows RT device, since only the Pro version of the Surface features a pen. In Pocketnow's shots, it can be seen running Office in fullscreen mode.

The unit looks a lot like one of the prototypes that Sony showed off back at CES, which we noted at the time looked like a perfect fit for Windows 8. Whether Sony is looking to announce it at IFA this week or wait until Windows 8's official release in October is a little closer is unclear, but between Sony and Samsung, Berlin's big tech expo could become a very interesting event in the next few days. 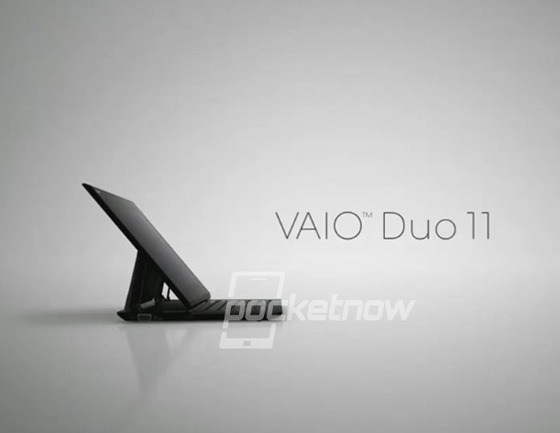