iPhone 5: making sense of the rumors

iPhone 5: making sense of the rumors

We round up the most credible rumors relating to the new iPhone.

We're almost a year on from the iPhone 4S' launch, and the world seems to agree that the time is right for a successor. We've been tracking some of the rumors about what many have dubbed the 'iPhone 5,' but we don't blame you if you feel a little overwhelmed — there's a lot out there and it's hard to know who to trust. With that in mind, we thought we'd sift through the most compelling rumors and let you know how we think Apple's next phone will shape up.

This time last year the internet was abuzz with rumors about a radical redesign for the iPhone 4's successor, which turned out to be for nothing when the near-identical 4S was eventually revealed. Things are a little different this time around, though — after more than two years it's almost certain that we'll see a genuinely new iPhone case design, and after an avalanche of leaks from various sources it seems likely that we've already seen it. Despite Apple CEO Tim Cook's claims that the company would "double down" on security, there's been a steady flow of credible-sounding information on the next iPhone ever since he made the remarks. It's not been quite as bad as a lost prototype iPhone 4 in a bar, but it's close. 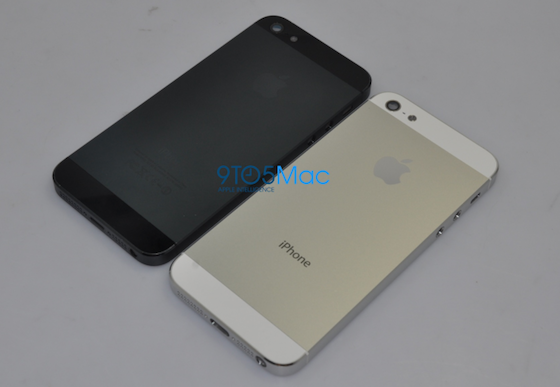 If these are to be believed, the next iPhone will be taller and thinner than the iPhone 4 and 4S and use a unibody aluminum chassis. The back of the phone will no longer use the fragile glass plate of before, instead switching to a metal panel with "windows" at the top and bottom to aid reception. These could be glass, plastic, or ceramic, but it's hard to tell from the photos or videos. Whatever they're made of, they contribute to the device's most striking visual feature — its two-tone design. It looks like there will be black and white models, but while the white unit pairs its top and bottom windows with a light brushed metal back, the black version opts for a gunmetal gray finish. This chassis design was described and mocked up by iLounge a few weeks before the supposedly real thing found its way online.

There are a few changes to the device's layout; the headphone jack has moved to the bottom, for example, and the front-facing camera is now above the speaker grille. The change that may make the biggest difference to the device's usability, however, is the shrunken dock connector — most recently backed up by the alleged leak of a new USB cable (below). We've heard variously that this will feature eight, nine, or 19 pins, but sources seem to agree that it's smaller and double-sided. Of course, this would break compatibility with the vast ecosystem of first- and third-party accessories that work with the previous 30-pin dock connector, so we have to imagine that Apple has an adapter solution in place. If not, you might have trouble finding a decent iPhone 5 speaker dock for a while. 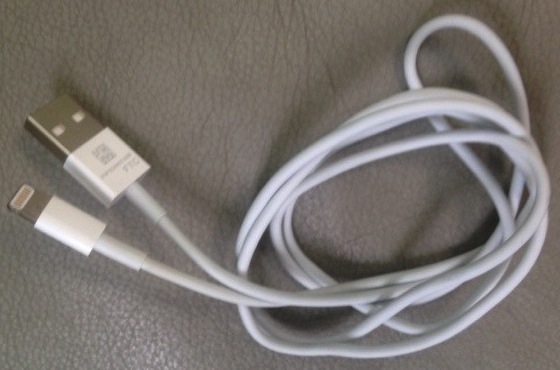 We don't think there's much doubt that these parts have come from an Apple supplier, but that doesn't necessarily mean that they'll make their way into the iPhone 5 itself. The company will build several prototypes for any product as important as this, and it's even possible that this one model has been leaked deliberately. That said, even if this particular device isn't showing us the true iPhone 5's industrial design, it certainly makes sense considering the specifications that we're a lot more sure about. For example, the display.

Update (8/31/12): The leaks continue to come fast and furious, with French site NowhereElse getting its hands on some images of the purported iPhone 5 lined up next to the iPhone 4S and iPhone 3GS. The design matches what we've seen before, but these new photos give a good idea of just how much bigger the new iPhone will likely be. Unsurprisingly, it looks to be a little bit taller (to accommodate the larger screen) and a little bit thinner. While lots of people have wanted a larger iPhone, it looks like this new design won't be too much of a burden on those who prefer the relatively small size of the iPhone 4S. 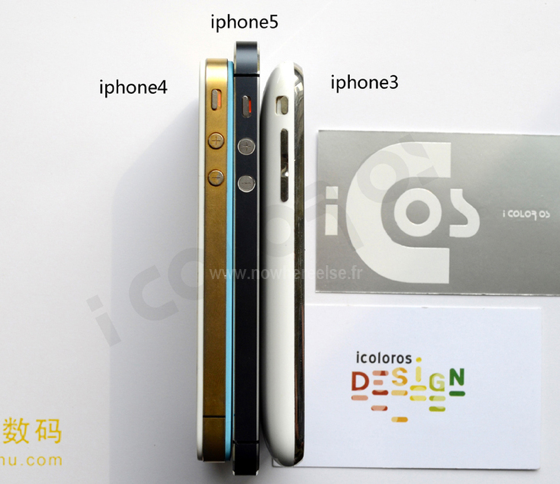 Update (9/2/12): We saw an iPhone 5 prototype at IFA that had been manufactured to the same specifications as all the leaked information you see above. You can check out our hands-on video of the mockup below.

An increase in screen size for the iPhone is long overdue, but the first solid word that Apple was considering a switch came back in May. Reuters and the Wall Street Journal both published reports within a day of each other claiming that the next iPhone's screen would be at least four inches from corner to corner and identifying Sharp, LG, and the newly-formed Japan Display as the manufacturers responsible.

It also seems clear that the iPhone 5 will shift to a 16:9 aspect ratio with a resolution of 1136 x 640. This would mean that horizontal resolution and pixel density remain unchanged; Apple would essentially be adding 176 vertical lines to the iPhone 4's display. 9 to 5 Mac reported this from its sources back in May, and corroborating evidence came from an emulator of the iOS 6 beta that is able to be run in 1136 x 640. The screen part and digitizer assembly has even shown up online for purchase.

We actually heard something similar on the Vergecast back in March with a caller using the same logic to suggest a 1152 x 640 resolution, and this idea was later elaborated upon in our forums. Whether these were excellent guesses or something more is unclear — Daring Fireball's well-connected John Gruber believed that our Vergecast caller "wasn't merely guessing or idly speculating" — but the 4-inch-or-thereabouts screen certainly seems a lock by now. 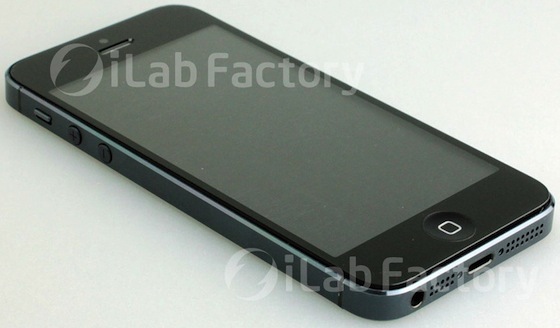 Everyone seems agreed on the dimensions, but the precise nature of the display itself is less clear. It seems likely, however, that the iPhone 5 will be one of the first products to employ a screen with in-cell touch display technology. This integrates the touch sensor into the display itself, allowing for a significantly thinner profile. While the rumor hasn't been as well-substantiated as the screen size itself, things do seem to line up; the Wall Street Journal reported that Sharp, LG, and Japan Display were all producing the in-cell screens for Apple in July, and while only Sharp has owned up to working on the iPhone display, LG has confirmed that it's started on in-cell manufacture.

Details on the iPhone 5's internals haven't been as forthcoming as the device's outside. We've heard vague rumblings that it'll use an A5X processor, for instance, following the same pattern of an iPad release providing the SoC for the iPhone later in the year, but the current 45nm A5X is a large, power-hungry chip that's unlikely to work well in a phone. It was developed for the new iPad's Retina display and needed a major increase in battery power to back it up, but the next iPhone is unlikely to require a similar leap. We think the new 32nm A5 chip used in the 2012 runs of Apple TV and iPad 2 would make more sense, and Apple would likely be able to clock it higher to maintain performance parity with the 4S and its slightly lower-resolution screen — that, or simply use the more efficient chip to improve battery life.

The other main point of speculation is whether or not this will be the first iPhone with LTE. We'll just come out and say it: we'd be shocked if it didn't happen. It's seemed a lock ever since the announcement of the LTE-equipped iPad in March, and between strings of tell-tale code in iOS and various comments let slip by carrier executives, we don't see any reason for that to change. At least in the US, it's at the point now where not offering LTE would put Apple at a major marketing disadvantage — AT&T's misleading "4G" claims notwithstanding. Anandtech believes that the iPhone 5 will use Qualcomm's MDM9x15 platform which has previously been employed in tandem with phones running Snapdragon S4 SoCs.

Anandtech also argues that TD-SCDMA 3G compatibility is "requisite for any further growth in China," and believes it will be included to allow for an iPhone on China Mobile, the world's largest carrier. A TD-LTE-compatible iPhone, meanwhile, is an outside bet which would give Apple future 4G access to China Mobile. SoftBank, the primary carrier of the iPhone in Japan, could also benefit from this having just launched a TD-LTE-compatible 4G network. It seems unlikely that Apple would do this so early, however, given the delay in licensing TD-LTE in China.

We also expect a jump to 1GB RAM, if for no other reason than because the iPhone 4S surprisingly had the same 512MB as found in the iPhone 4. Other phones like the Galaxy S III have already started to move to 2GB of memory, but iOS devices have historically competed quite well with their Android contemporaries without matching them on pure hardware grunt. 2GB would likely be overkill, but 1GB would represent a nice bump over the still-speedy 4S while matching the new iPad.

We're not convinced about NFC

Finally, rumors of NFC support have popped up this week based on hardware shots showing a mysterious square chip near the front-facing camera. Apple has shown an interest in NFC technology via patents before, and iOS 6's Passbook feature would seem like a good fit. We're not convinced, though, for reasons of practicality as much as anything else; NFC chips tend to be as large as possible in order to maximize the chance of connection, and the chip seen here is very small. The iPhone 5's presumed aluminum back panel wouldn't do much to help this, either, a position backed up by Jim Dalrymple of The Loop. The Wall Street Journal also reported last month that Apple abandoned the idea of NFC due to concerns over battery life and adoption rate. 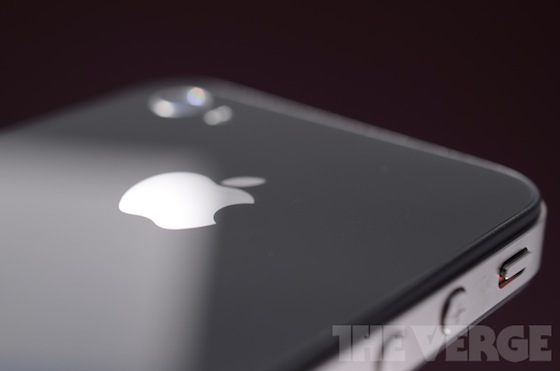 Finally, what will the thing be called? The world has apparently decided to dub it the iPhone 5 ahead of time, but honestly we'd be surprised and a little disappointed if Apple goes that way – after all, it'll be the sixth iPhone, not the fifth. Other options exist — iPhone 6, iPhone 4G, iPhone 4GS, iPhone LTE — but if we had to guess? Just "iPhone." The new iPhone.

Update: As expected, Apple just invited the press to an event in San Francisco on Wednesday, September 12th. While the invite didn't specify what products it would focus on, the design of the invitation seems to make it clear that it'll be some product with a "5" in its name. It looks like our intuition about "the new iPhone" may have been off — we'll find out for sure next week.

More from this stream The new iPhone 5: everything you need to know