We've heard a lot about LG's new flagship LTE phone over the past week or so, and now it's official: the Optimus G will arrive in South Korea next month on all three major operators, and will arrive globally after that, including an October or November launch at Japan's NTT Docomo. As expected, the Android 4.0 smartphone has a quad-core Snapdragon S4 Pro processor, a 4.7-inch 1280 x 768 IPS display, LTE radios, 32GB of storage, 2GB RAM, NFC, and a 13-megapixel camera, as well as a 2,100mAh battery. LG is particularly talking up its "fully integrated touch technology" for the 8.45mm-thick phone, which the company claims allowed it to reduce the air gap between the display and the surface, as well as the size of the bezel.

In Japan, the phone will run on Docomo's Xi LTE network and look rather different, with a candy red and black shell and Docomo's traditional Palette UI on top of Android 4.0. You can see pictures of that below. Other typically Japan-specific features include waterproofing, infrared data transfer, osaifu-keitai mobile wallet, and OneSeg and Nottv mobile television services, though we imagine most of those will be excised for any future Western release. We'll let you know when we hear more about wider availability. 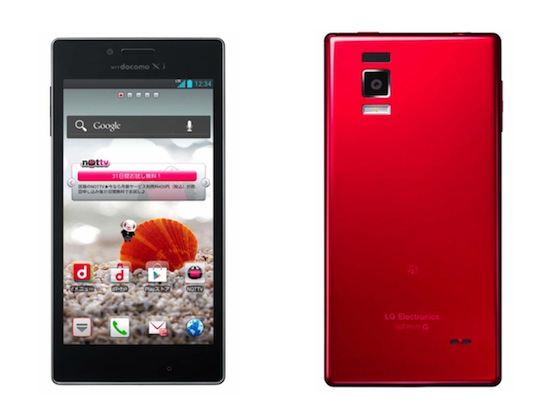