Samsung this week launched Drive Link, an in-car app for the Galaxy S III that allows users to listen to music, access GPS navigation, and make hands-free calls while driving.

Samsung made mention of Drive Link earlier this year, when it unveiled its TouchWiz Nature UX for the Galaxy S III. The app's welcome screen, displayed above, presents local weather and upcoming appointments, alongside large icons for navigation and calls. If a scheduled appointment or received text message contains an address, drivers can set it as their destination with one tap of the screen.

Drive Link can also connect to a car's infotainment system through MirrorLink, and uses text-to-speech technology to read aloud any incoming texts, emails, or social media updates. Users can stream music through their car's speakers, as well, whether they be files stored on their handsets, or those available through TuneIn. Support for more web radio apps will be available at a later date.

Samsung notes that Drive Link's large icons and simplified menu system make it ideal for safe in-car operation, adding that the app meets the safety regulations established by the Japanese Automotive Manufacturers Association. Drive Link is available today from Samsung Apps in 21 countries across Europe, including France, Germany, Russia, and the UK. For now, the app is launching exclusively on the Galaxy S III, though it will be available on other handsets running Android 4.0 "in the near future." 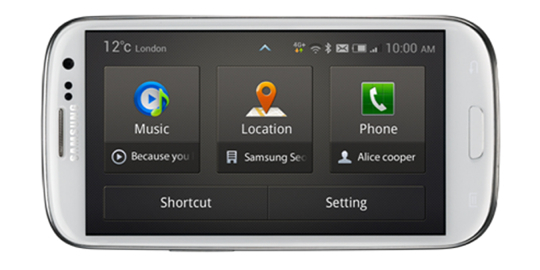