An ad for Google's new Nexus 7 popped up on the front page of Google today, a rare and notable occurrence.

An ad for the new Nexus 7 popped up on the front page of Google today, a rare and notable occurrence. This isn't the first time that Google has used its home page to advertise select products — the Nexus One, Nexus S, Droid, G1, and the Chrome browser have all had their moment in the spotlight — but it is the most noticeable thus far. The ad goes beyond the site's past attempts which were primarily limited to text, and shows the 7-inch tablet peeking into the page with a direct link to the 8GB version in the Google Play Store. While most avid tech followers don't need a reminder that the Nexus 7 exists — and the company's past home page campaigns have seen mixed results — Google's enormous traffic is likely to drive far more attention to the tablet than it's seen thus far. 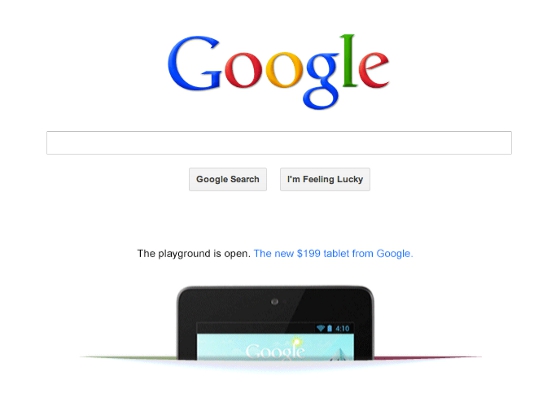