More information regarding Intel's Valley View Atom SoC has surfaced, courtesy of a leaked document found on Baidu by German website ComputerBase. As expected, the chips will utilize the company's 22nm Silvermont architecture and will be available with one, two, or four CPU cores, with speed estimates ranging from 1.2GHz to 2.4GHz once the chips are actually produced. The GPU features four Intel Gen 7 (Ivy Bridge) Graphics Engines, which the company claims will perform four to seven times better than the E600 Atom processor series that are equipped with the same PowerVR SGX 535 graphics found in Apple's original iPad. The SoCs will also support up to 8GB of DDR3L/1333 RAM, as well as I/O interfaces for SATA II, a single USB 3.0 port, and up to four USB 2.0 sockets. 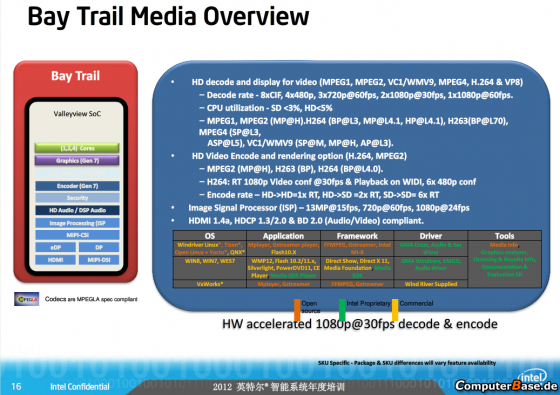 For the most part, the Valley View chips are intended for embedded applications, with only the Type-4 Package set to reach consumers. This particular configuration utilizes a quad-core processor and should be clocked at 1.6GHz or higher. Intel is expected to begin shipping the Valley View SoCs to manufacturers during the fourth quarter of 2013.