Sony has just officially announced its new 84-inch 4K television at its IFA 2012 press conference, the company's first 4K TV, and its first TV with passive 3D viewing. Sony says the new XBR-84X900 television is capable of upscaling content to 4K (that's a resolution of 3,840 x 2,160) from any source, including things like digital photos from the PlayStation 3. As you can see from the picture above, the panel is a sizable stand-up unit with two long vertical speaker bars — Sony says the TV incorporates a 50 watt "10 unit live speaker system" that provides 5.1 surround sound. The XBR-84X900 is also a connected television with Wi-Fi, and Sony says it can be controlled with a smartphone or tablet via the company's Media Remote app. 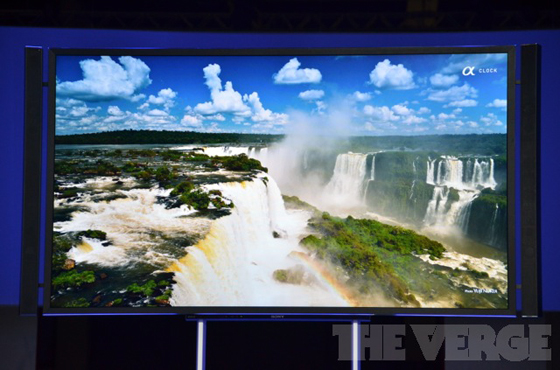 The announcement extends Sony's recent foray into the world of 4K with new video cameras and projectors, and comes even as Sony has said it plans to reduce its investment in its flagging TV business. Sony says the new 4K TV will be available this holiday season, though no price has been announced yet. Stay tuned for our hands-on with Sony's new 4K beast, and be sure to check the rest of our IFA 2012 coverage for other announcements.

More from this stream Best of IFA 2012: live from Berlin