Samsung beats Nokia to the punch with Windows Phone 8, but does it matter?

Samsung may have beat Nokia to be the first company to announce a Windows Phone 8 smartphone, with the Ativ S launch today, but does that really matter in the end?

Share All sharing options for: Samsung beats Nokia to the punch with Windows Phone 8, but does it matter?

Microsoft's Windows Phone 8 is the company's next big attempt to win back some of the mobile market that it has ceded to Apple and Google over the past few years. Thanks to a multi-billion dollar agreement, Nokia sits poised to be Microsoft's biggest partner in this push, just as it was there for Windows Phone 7.5. The Finnish company has put all of its weight behind Windows Phone, and has decided to forgo the more popular Android platform entirely.

But today we saw Samsung — and by extension Microsoft — announce the first Windows Phone 8 smartphone, the Ativ S. Frankly, the Ativ S came out of the blue to many in the industry — I don't think anyone really expected a Windows Phone 8 device to show up during Samsung's big Mobile Unpacked event at IFA 2012. Historically, Samsung has kept its Windows Phone and Android device lines separate at launch events, despite the similarities between the design of the phones. At the Unpacked event for IFA 2012, we expected Samsung to unveil its Galaxy Note II and Galaxy Camera Android devices, which it did, to be certain. But unlike the Android products announced, the rumor mill did not produce any leaks of the Ativ S until just this morning — an increasing rarity in today's smartphone world. Surprise or not, though, it can't be denied: Samsung beat Nokia to the punch to announce the world's first Windows Phone 8 smartphone. 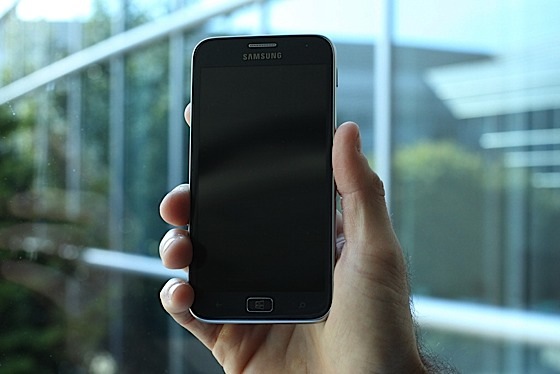 What makes this story even more interesting is just how the Ativ S was introduced to the world. While Samsung announced it all the way at the end of its nearly two-hour long Unpacked presentation, Microsoft decided to post a full-on reveal of the Ativ S to its official blog hours beforehand. It's hard not to see this as an official blessing and stamp of approval for Samsung from Microsoft — and a pretty big snub to Nokia.

There has been a fair amount of anticipation surrounding Nokia's plans for Windows Phone 8, with designs for both mid-range and high-end devices leaking left and right. But for the most part, Nokia has been holding its cards close to its chest, providing vaguely-worded invitations for launch events to the public and the press alike. The company has a big event scheduled for next week, where we will almost certainly see what it has up its sleeve and planned for Windows Phone 8. And though Samsung beat Nokia to an announcement by a week, new info on Microsoft's Windows Phone 8 launch that leaked today might mean that it won't matter all that much in the long run. If we have to wait nearly two months before the first Windows Phone 8 devices are actually on shelves and available for purchase, what's a week between announcements?

We reached out to Microsoft spokesperson Greg Sullivan for comment on the matter, and he noted that the blog post announcing the Ativ S pretty much says it best: this is just the first of many Windows Phone 8 devices to be announced in the near future.

What's a week between announcements?

Nokia appears to be taking it in stride as well. The company had employees on the ground at Samsung's event with signs that read "Samsung: Nokia welcomes you back to Windows Phone…", which might be a gentle rub at Samsung's relatively relaxed approach to its Windows Phone line in the past. Nokia isn't shy about using this kind of guerrilla marketing tactics — it has pulled similar stunts at HTC events in the past.

Looking at the broad scope of things, having more partners actively supporting the Windows Phone platform is only a good thing for Microsoft, regardless of which company launches first. Microsoft's earlier Windows Phone efforts have not allowed it to gain the traction in the marketplace that it once had, and the feeling in the industry is that it really needs Windows Phone 8 to be a success. Whether that happens because of Samsung, Nokia, or one of the other Windows Phone partners likely doesn't matter to Microsoft.