Hot on the heels of President Obama's Reddit AMA, The Wall Street Journal has reported that the Romney campaign will leverage a little bit of the internet, too: it has bought a national trending topic on Twitter for Thursday night. The Journal confirmed with the Romney campaign's digital director Zac Moffatt, and Twitter confirmed to us that this is the first official political campaign to buy a trending topic, which has been possible since December of 2010. Thursday night, the last night of the RNC, is the night that Mitt Romney is scheduled to officially accept the Republican nomination for President in Tampa, Florida.

While sponsored trending topics are marked as such on Twitter's homepage, they appear in stream by users as hashtags, so users aren't necessarily aware that the topic is a promoted one. Twitter gives businesses the ability to purchase trending topics on both local and national levels.

Update: The trending topic that the Romney campaign has purchased is #RomneyRyan2012 and if you go to Twitter now, you'll see that it's quite an active topic tonight, on the last night of the Republican National Convention, with Mitt Romney scheduled to speak. 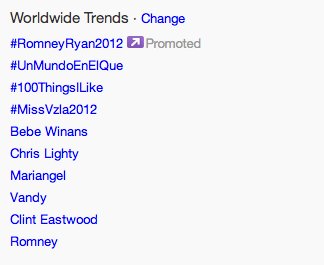