Phil Schiller and Scott Forstall provided a look inside Apple during their testimony today — though it's safe to say Samsung scored some points as well.

While the last few days have been filled with theatrics from the Apple v. Samsung legal teams, today we got back to the two sides explaining their cases before the nine-person jury. Phil Schiller was up first, and walked the courtroom through the impetus for the original iPhone in 2004 — "We realized at the time that some phones weren't any good as entertainment devices," he said — as well as the success the smartphone had upon launch. In fact, after a few years the iPhone became so successful that the company had a simple shorthand for estimating sales of the newest version: "Each new generation sold approximately equal to all previous generations combined."

Pivoting to advertising expenditures, Schiller then outlined the company's product-first marketing strategy, dubbed "product as hero" (though one has to wonder if that mantra is still in effect given the company's latest round of ads). We also got a good look at how much Apple has spent to advertise the iPad and the iPhone in the US: $647 million on the iPhone since 2007, with the iPad coming in at $457.2 million. 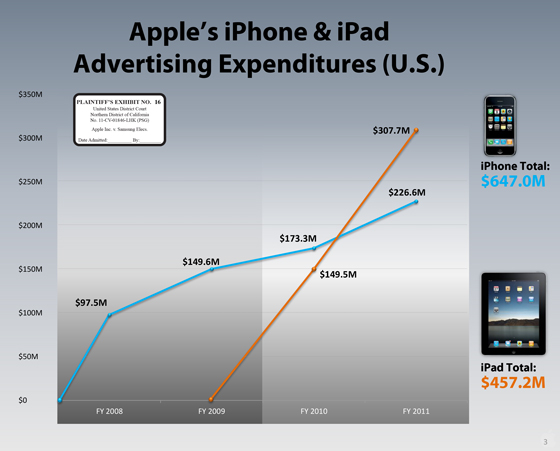 In a two-step we saw with both Apple employees today, Samsung's attorneys put an iPhone and one of the accused Samsung phones next to one another and asked Schiller if a customer could be confused by the two. He stated some customers could be confused, while also reiterating that he felt Samsung had "ripped off" Apple (the company's legal team clearly has decided to hammer the phrase home, with Christopher Stringer, Schiller, Forstall, and Apple counsel William Lee all using "ripped off" when describing Samsung this week). Samsung had an awkward moment, however, with one of the company's attorneys confusing two of its own phones when handing them to Schiller; hardly what you're looking for when arguing that your own designs are as distinctive as those of the company suing you.

Due to secrecy, Forstall could only hire within the company

While Schiller may have provided a look at the inner business workings of Apple, Forstall took the jury right into the creation of the iPhone itself, from the original proof-of-concept in 2004 — a simple contact list built using just one corner of the iPad prototypes the company was developing — to the assembly of the software development team. Due to secrecy concerns, Steve Jobs told Forstall he could only hire designers and engineers from within the company. Forstall would bring prospective hires into his office and tell them "We're starting a new project. It's so secret I can't even tell you what that project is. I can't tell you who you will work for... What I can tell you is that if you accept this project you... will work nights, you will work weekends, probably for a number of years."

Forstall also revealed that the company used colors as code-names for its projects, with the original iPhone being dubbed "Purple", a name we saw just last week. The locked-down building the iPhone was developed in was known as the Purple Dorm, due to its 24 / 7 nature and faint odor of pizza. In a move that ranks right up there with the original Macintosh team's pirate flag, Forstall said that "on the front door of the Purple Dorm we put a sign up that said 'Fight Club'... because the first rule of that project was to not talk about it outside those doors."

Steve Jobs was receptive to a 7-inch iPad

Samsung then went on the attack, using Forstall to introduce several emails into evidence — all of which were aimed at framing the company as one that took liberal amounts of inspiration from others, rather than create its own unique designs. An email chain about the Samsung SGH-E910 saw Steve Jobs telling Jony Ive that a design element of that particular phone "may be our answer", while a 2011 email had Apple's Eddy Cue writing to the company's executive team that Apple should pursue a 7-inch device and that Steve Jobs had been "very receptive" to the idea.

Rounding out the day was Justin Denison, chief strategy officer of Samsung Telecommunications America. The strategy of Apple's attorneys was straightforward: use internal Samsung documents to discredit Denison's deposition testimony that Samsung designers hadn't copied Apple devices. The jury got its first look at the "Beat Apple" strategy documents in the process, as well as several internal Samsung documents where the company compared the GT-i9000 (the original Samsung Galaxy S) to the iPhone several months before Samsung's device was released. Most damning was an icon comparison, where Samsung had listed "Remove a feeling that iPhone's menu icons are copied by differentiating design" as one of the "directions for improvement."

Samsung scored some points on the cross-examination

That said, it wasn't clear how much of an impact the documents had on the jury, especially given that Samsung attorney John Quinn followed by asking Denison a round of questions that allowed him to give several succinct reasons for why Apple's design choices were matters of practical necessity rather than aesthetic innovation. Rounded corners, he said, were an obvious choice because they made phones feel better in the hand and easier to slip in and out of pockets. Slim black borders on either side of a display were also required as they allowed the display and glass front to be glued to the device while also increasing durability.

Denison further explained the shift towards slate-style phones as one spurred by newfound technological feasibility rather than copying. "As these technologies become available, that's when you seem them integrated into the market," he said, later elaborating that "I'd say that's the general direction the industy is going in, yes."

Be sure to check out our liveblogs for both Phil Schiller and Scott Forstall for the blow-by-blow, and we'll be back in the courtroom on Monday to bring you the latest as the trial continues.